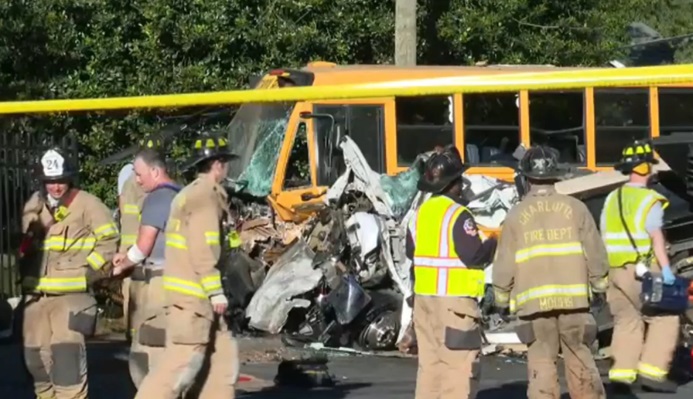 A head-on collision between a school bus and a dump truck in North Carolina has left 14 students hospitalized, officials say.

The Charlotte Mecklenburg School District said 15 students were traveling on the bus at the time of the crash this morning.

“Bus 222 is a school bus that serves South Mecklenburg high school,” the district said in a statement. “The school bus driver is also injured.”

Local medical officials told Queen City News that one person has life-threatening injuries and another has serious injuries following the crash. The 15 students are reported to have non-life threatening injuries, one of which reportedly refused to be taken to a hospital.

Officials say the crash happened at Sharon Brook Drive and Sharon Road West, which is less than 2 miles from the school.

A Charlotte Fire official told WCNC that it took 30 minutes to free the bus driver from the wreckage and an hour for the truck driver.

Police are on-scene and investigating.

Two people were killed in a collision in Shafter