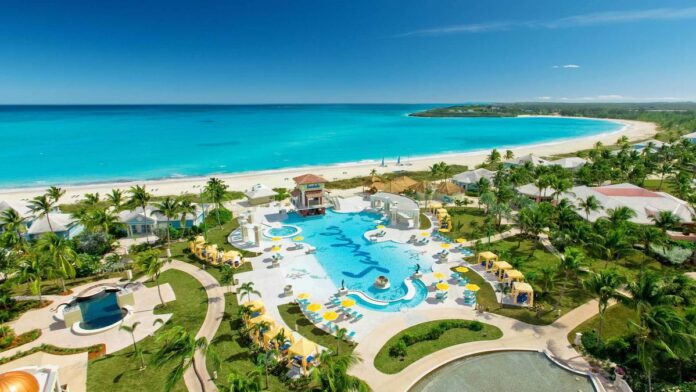 Three people from the US have mysteriously died at a luxury resort in the Bahamas
The acting prime minister has confirmed that two men and a woman died at Sandals Emerald Bay in Exuma.

MP for Exuma and minister of tourism Chester Cooper said another American woman was airlifted to Princess Margaret Hospital in Nassau.
Cooper said that the cause of the three deaths is currently unknown, but added that “foul play is not suspected

A spokeswoman for Sandals said the staff at the Exuma resort had been alerted to a health emergency and medics were quickly sought.
She told the Daily Mirror that the guests’ families are being supported.

Local police believe two of those who died complained of feeling ill the night before, People reported.
A force spokesperson said: “Our initial investigations revealed that the couple found in the second villa complained of illness the previous evening.

“They attended the local medical facility and on completion of receiving treatment, they returned to their lodging.”

Officers said two of the victims, who were allegedly a couple, were found in the same property and had shown signs of “convulsions”, but added there were no indications of trauma.

The plush Bahamas destination is popular with Britons, as well as other hotels in the Sandals chain across the Caribbean.
Mr Cooper told the Mirror: “I have been regretfully informed today of the death of three American visitors, two men, and a woman, at a resort property on Exuma.

“Another American woman has been airlifted to Princess Margaret Hospital.
“I have been briefed by the commissioner of police and the resort’s executive management on the matter. I am currently in Eleuthera on ministerial business. As I am acting in the capacity of prime minister, I have briefed Prime Minister Davis on the matter.

He continued: “Police are investigating and the cause of death is still unknown.

He added: “The public will be kept abreast of information as soon as it becomes available. We offer our thoughts and prayers to the families affected.”

A Sandals spokesperson said: “Nothing is more important to Sandals Resorts than the safety of our guests.

“A health emergency was initially reported and following our protocols we immediately alerted emergency medical professionals and relevant local authorities to provide support and investigate the situation.”

Walmart increased wages to nearly 165,000 workers every hour across US stores, introducing new...

4 skiers killed, 4 injured in an avalanche in Utah