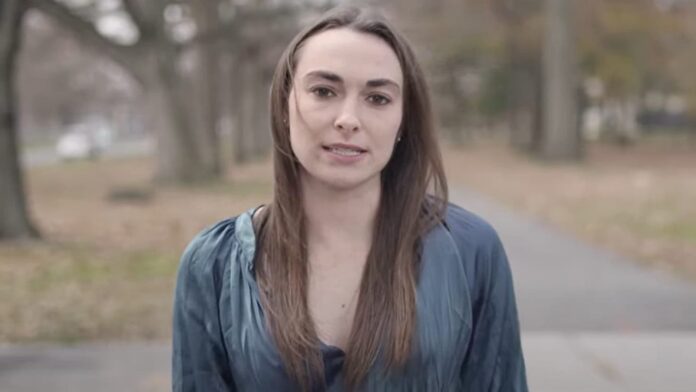 A Pennsylvania candidate for the U.S. House has been open about her past as a part-time stripper in college and her decision to get an abortion when she was 18.
Alexandra Hunt, who is running for the Democratic nomination for a Philadelphia-area congressional district, has used her past to drive attention to her progressive campaign platform, including by starting an OnlyFans page for herself that is not associated with her campaign.
In a May 2021 video posted to Twitter, Hunt described what led her to get an abortion a decade ago.
“When I was 18, I was part of the 2% of people who can get pregnant on birth control and I found out I was pregnant. And I decided that I was not ready to bring a child in this world and I decided to get an abortion,” Hunt says in the video.

Hunt went on to say that the state of the world back then, and today, was not the kind of place she would want to bring a child into anyway. “I as a person was not ready to bring a child into this world, but also the world was not in a state — and is not, 10 years later, is not in a state — that I wanted to bring a child into yet, which is my decision to make,” she said.
She also lists the reasons she thought the world was not in a state for her to raise a child. “My generation faces a lack of jobs, a lack of living wage, a housing crisis, an affordable housing crisis, a student debt crisis, the climate emergency, the prison-industrial complex, and the list goes on and on. And I wanted to offer my child better.”
Hunt said she got her abortion through Planned Parenthood, and that the decision “was made with a lot of love.”
In a December tweet, Hunt said: “Having an abortion enabled me to progress in my career, cut ties in an abusive relationship, and get to a place of economic security so I can properly care for my future children when I’m ready to become a mother.
Hunt told Fox News Digital in a statement that she believes her decision to be open about her previous career is resonating with voters.
“We just out-raised the incumbent in the first quarter of 2022, so I think my decision to not be ashamed of how I afforded to go to college is resonating with voters. People are sick of being shamed for perfectly legitimate choices they’ve made in their lives,” Hunt said.
Hunt is running to unseat incumbent Democratic Rep. Dwight Evans in the primary election May 17. She reported raising nearly $328,000 in the first quarter of 2022 — which is more than Evans’ total haul of nearly $260,000 in the same period. However, Evans’ campaign has over $769,000 total cash on hand compared to Hunt’s $535,000.
“As far as my abortion, I was 18 and was not able or ready to be a mother,” Hunt told Fox Digital. “Other women who make a different choice should be respected for their choice, as long as it is actually a choice, not coerced by government.”
“I plan on having children and am very much looking forward to being a mother and raising my children in safe, sustainable, just world that our movement is fighting for,” Hunt added
After taking criticism for her previous abortion and work as a stripper, Hunt started an OnlyFans account this week — which drew more attention to her candidacy. There, she has continued to promote a progressive platform and state that she is not beholden to corporations.
“Contrary to many of our elected officials, I’m now making honest money on #OnlyFans instead of investing in the fossil fuel industry that’s leading to the destruction of our planet,” Hunt said in a post on her OnlyFans page.
also supports her campaign through an online store selling shirts that say “Elect Hoes” and “I may have danced for money but I’m no corporate whore.”
The decision to be open about her previous career pole dancing was two-fold, Hunt said in an interview earlier this year. “I was nervous that that somebody could just come out of the woodwork and be like ‘that actually looks like a stripper I used to know’ and pull apart our campaign,” Hunt told podcaster Nick Viall in February.
She said she also opened up about being a stripper in order to represent sex workers.
“I think that to fall silent on a community that is so marginalized is harmful, so I chose to fight back against the stigma and the shame that is associated with this part of my past, and lead with it so that I can advocate for a community that I’m a part of,” she said.

one dead, 20 hurt in mass shooting at Arkansas car show

Time magazine awards LeBron James the “Sportsman of the Year”

US sues Texas to block state troopers from stopping migrants