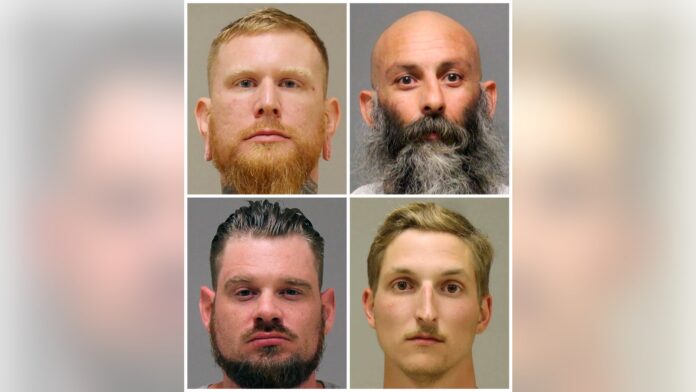 Two of four men were acquitted in a conspiracy to kidnap Michigan Gov. Gretchen Whitmer in 2020, motivated by fury at the Democrat’s tough COVID-19 restrictions early in the pandemic
The verdicts against Daniel Harris and Brandon Caserta were read in the federal court in Grand Rapids, Michigan. Jurors said they couldn’t agree on verdicts against Adam Fox and Barry Croft Jr. Prosecutors described Fox as a ringleader of an anti-government group.
Earlier in the day, the jurors said that there are several counts which the deliberative body were deadlocked on. Testimony began
“It is not unusual to come back somewhere along the line of deliberations and say ‘we tried, but couldn’t get there,'” U.S. District Judge Robert Jonker said, according to Detroit News. “At least not on everything.
He encouraged the jurors to continue deliberations in hopes of reaching a unanimous decision, saying, “Before that’s the final answer, I would like you to go back and make another effort to see if you can come to an agreement on issues you are stuck on as a group.”
Fox, Croft and Harris faced additional charges. The two most serious charges, kidnapping conspiracy and conspiracy to use explosives, both carry potential life sentences.
The trial lasted over 20 days. Prosecutors said they turned their anger toward the government in 2020 into a plot to kidnap Whitmer because of the restrictions she imposed during the early months of the pandemic.
Defense lawyers claimed informants and undercover agents improperly influenced the men.
Federal prosecutors countered the argument with evidence that the men discussed abducting Whitmer before the FBI sting began and that they went beyond talk. They scouted Whitmer’s summer home and tested explosives, they said.
According to evidence, a homemade explosive was detonated during training in September 2020, about a month before the men were arrested.
In his closing argument on April 1, Assistant U.S. Attorney Nils Kessler said Croft wanted to test the explosive as a possible weapon to use against Whitmer’s security team. He quoted him as saying the pennies would be so hot they could go “right through your skin.”
Whitmer, a Democrat who is seeking reelection, rarely talks publicly about the case. She has blamed former President Donald Trump for fomenting anger over coronavirus restrictions and refusing to condemn right-wing extremists like those charged in the case. She has said Trump was complicit in the Jan. 6 Capitol riot.
A man upset over state-ordered coronavirus restrictions was sentenced to just over six years in prison last year after admitting to involvement in the plot – a significant break that reflected his quick decision to cooperate and help agents build cases against others.
Ty Garbin admitted his role in the alleged scheme weeks after his arrest last fall. He is among six men charged in federal court but the only one to plead guilty so far. It was a key victory for prosecutors as they try to prove an astonishing plot against the others.
Garbin apologized to Whitmer, who was not in court, and her family.

Boy killed in road-rage shooting to be memorialized at zoo

Cleveland Police said a young woman hanging from a car window was killed in...