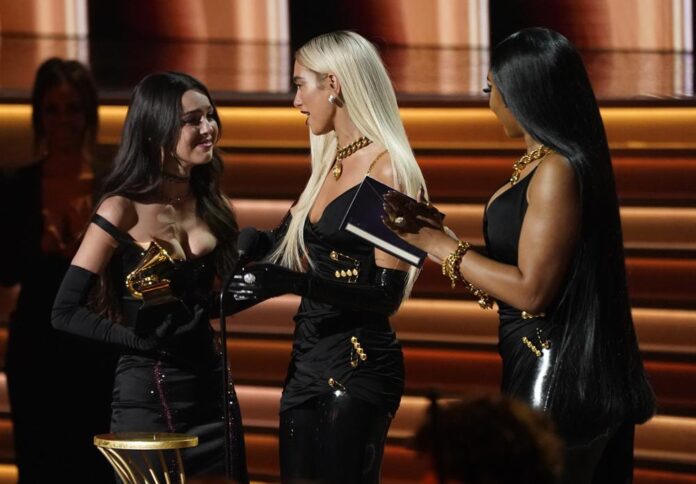 LAS VEGAS (AP) — Olivia Rodrigo has won the best new artist crown at the Grammy Awards, joining esteemed previous company including Carly Simon, Crosby, Stills & Nash, Tom Jones, the Beatles and Billie Eilish.
A veteran of the “High School Musical” series, Rodrigo became the breakout music star of 2021, leading with her massive viral hit “Drivers License” and following with the aching album “Sour” and the single “Good 4 U.”
So far Sunday, “Drivers License” has earned her the trophy for best pop solo performance, and it is up for record of the year, while “Sour” is up for album of the year. Rodrigo came into the night nominated for the night’s top four awards — best new artist, album, record and song of the year — but lost the best song trophy to Silk Sonic.

“This is my biggest dream come true,” she said.
Silk Sonic — the all-star union of Bruno Mars and Anderson .Paak — opened the Grammys in Las Vegas with their high-energy, infectious fix of retro soul and funk by performing their “777.” They returned to the stage a short time later to collect the song of the year trophy for “Leave the Door Open
The win helps Mars tie the record for most song of the year wins. He had previously won for “24K Magic.”
Both Mars and .Paak jumped out their seat, threw up their hands and dance to their song.
“I couldn’t be more proud to be doing this with than anyone other than you,” Mars said to .Paak. “We’ll be singing this song together for the rest of our lives.”
Host Trevor Noah introduced the duo’s opening performance by saying they were singlehandedly bringing back the 1970s, “which might explain the inflation.

By the time the show started on CBS, Jon Batiste has already taken home four Grammy Awards, including his first ever, in what could be a big night for this year’s leading nominee.
During the show’s pre-telecast ceremony, Batiste won for best American roots performance, best American roots song, best music video and tied with Carlos Rafael Rivera for best score soundtrack for visual media. His song “Freedom” in the music video category beat out several other tough competitors, including Olivia Rodrigo, Lil Nas X and Billie Eilish.
“I am so grateful for the gifts that God has given me and the ability to share that for the love of humankind,” Batiste said. “We just wanted everyone to see it. Any depression, any bondage or any darkness that was over your life is completely removed by just the love and the joy of the video.”
Batiste — not present for his first three awards — also won for “Soul” alongside Rivera for his composing efforts on “The Queen’s Gambit.”
It’s the first tie since 2019 when Kendrick Lamar, Jay Rock, Future and James Blake tied with Anderson .Paak to win best rap performance.

Billie Eilish paid tribute to Hawkins during her performance, wearing a T-shirt with his photo and name on it.
TJ Osborne, who came out as gay last year, fought back tears as he and his brother accepted a Grammy for their song “Younger Me.” He noted the song was inspired by his coming out.
“I never thought that I would be able to do music professionally because of my sexuality. And I certainly never thought I would be here on the stage accepting a Grammy after having done something I felt like was going to be life changing and potentially in a very negative way,” Osborne said.
“And here I am tonight, not only accepting this Grammy Award with my brother, which I love so much, but I’m here with a man that I love and he loves me back. … “I don’t know what I did be so lucky.”

Osborne performs with his brother John as the Brothers Osborne.
Ahmir “Questlove” Thompson won his sixth Grammy for best music film through “Summer of Soul (… Or, When the Revolution Could Not Be Televised.”) His documentary also won an Oscar for best documentary feature last weekend.
Chick Corea and Vicente Fernandez each won posthumous Grammys. Joni Mitchell won best historical album for “Joni Mitchell Archives – Vol. 1: The Early Years (1963–1967).”
“Thanks to the academy for this nomination and this win, I didn’t expect this,” she said.
Eilish could become the first artist ever to win record of the year three times in a row, and the only artist along with Paul Simon to take home the award three times. She’s in position to join Adele as the only artists to ever win three major categories — record, song and album of the year — twice. She previously won for “Bad Guy” and “Everything I Wanted.”

The ceremony shifted from Los Angeles to Las Vegas because of rising COVID-19 cases and the omicron variant in January, with organizers citing “too many risks” to hosting the performance-filled show at the time. It airs live beginning at 8 p.m. EDT on CBS and Paramount+.
Artists competing with Eilish for album of the year include Rodrigo, Batiste, Tony Bennett and Lady Gaga, Justin Bieber, Doja Cat, H.E.R., Taylor Swift, Lil Nas X and Kanye West.

Bennett extended his record as the artist with the most traditional pop vocal album with 14 wins with “Love for Sale,” a duet album with Lady Gaga.