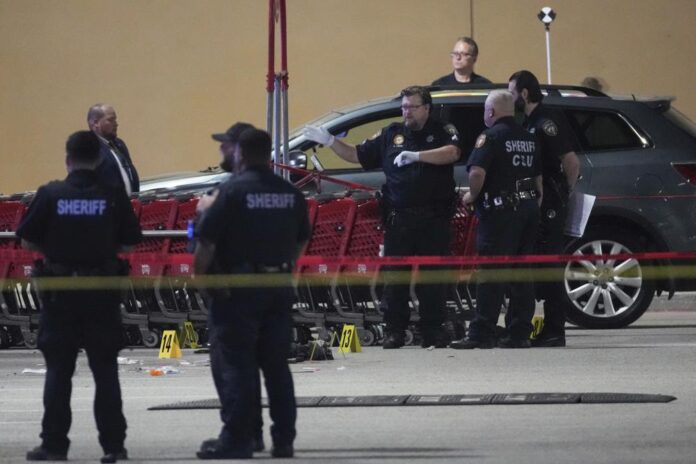 HOUSTON (AP) — An off-duty Texas deputy sheriff was killed in a shooting on the northern outskirts of Houston when he interrupted three men apparently trying to steal the catalytic converter from his vehicle, authorities said.
Deputy Darren Almendarez, 51, was fatally shot at night in a grocery store parking lot, according to Harris County Sheriff Ed Gonzalez.
Two of the suspects were shot and wounded during an exchange of gunfire with Almendarez and were hospitalized in custody, Gonzalez said.
Joshua Stewart, 23, and Fredarius Clark, 19, are charged with capital murder, according to court documents. Clark remained hospitalized Friday in stable condition, while Stewart was discharged and booked into Harris County Jail, said Senior Deputy Thomas Gilliland. It was unclear from court documents if they had attorneys.

A third person, believed to be a male teenager, fled the scene and was being sought.
Gonzalez said Almendarez had been shopping with his wife to buy groceries for a Friday cookout for Almendarez’s sister, whose birthday was.
“We’re tired that people aren’t even safe to go out to the grocery store. This is a cop. This is a cop that’s just out with his family. It could be any one of us — and it happened to be him,” Gonzalez told reporters.

Almendarez told his wife, who was not injured, to run away before he was shot, Gonzales said.
Texas Gov. Greg Abbott offered prayers for Almendarez’s family in a statement Friday.
“Deputy Darren Almendarez lost his life while answering the call to serve and protect his fellow Texans, and this tragedy is a heartbreaking reminder of the sacrifices our law enforcement officers make both on and off duty,” Abbott said.

Fishing in the Florida Keys