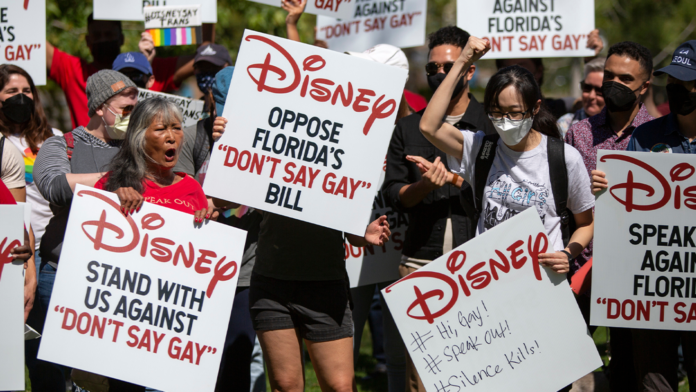 For those who loved the magic of Disney as children and have seen the wonder in our children’s eyes Disneyworld, it’s disconcerting to see the company that animated our childhoods, and now our children’s childhood, slowly become more progressive.

Upon watching its newest movie with Pixar entitled “Turning Red,” it’s clear that the clock has finally struck midnight for Disney’s era of whimsical fairy tales with moral lessons. Gone are the innocent days of “bibbity-bobbity-boo;” Disney has now transformed into a political propaganda machine that grooms children for abortions and sexual promiscuity—and nothing showcases their regression into a progressive pumpkin better than their new movie.
Turning Red,” rated PG, is the story of a thirteen-year-old girl named Mei who inherits her family’s curse to become a red panda whenever she feels passionate emotions, including sexual tension, which feels wildly inappropriate in a movie targeting young children like mine.

Mei and her friends are in a tug of war with their parents that the writers sexualize as they have the characters catcalling boys at school, endorsing “stripper music,” and making plans to rebel against their parents who have legitimate concerns for their safety. But it gets worse.

The abortion lobby gets in on the action in the very end when Mei goes out with her panda tail and ears on display. When her mother disapproves, Mei apes the abortion lobby’s signature and sinister catchphrase as she says, “My panda, my choice.”

Disney clearly is no longer interested in being a guardian of the innocence of childhood. Instead, by their own admission, Disney leadership is actively pushing children out of Neverland and directly into an adult’s sexualized world, where they can be groomed for others enjoyment.
It doesn’t seem coincidental that as this movie projects sexuality into children’s thoughts, Disney is also engaging in a campaign for politicized sex education in its home state. Disney recently spoke out in opposition to Florida’s Parental Rights in Education bill, which would prohibit the discussion of sexual orientation and gender identity in grades Kindergarten to Third.
Disney CEO Bob Chapek said that he was opposed to the bill from the onset and called Florida Governor Ron DeSantis to say as much. He also asserted that the company would be stopping political funding in Florida and instead focusing its resources on supporting “advocacy groups to combat similar legislation in other states.” Disney indeed pledged $5 million to the Human Rights Campaign. However, its contribution was denied by HRC, believing Disney needs to do more for the alphabet soup lobby.

But what more can Disney really do? Sexualized content seems to be the new pixie dust at Disney, sprinkled liberally.
The LGBTQ+ community has already been featured multiple times in Disney productions. For example, the popular Star Wars series featured a same-sex kiss in “The Rise of Skywalker,” and Disney even made a short with Pixar about two gay lovers entitled “Out.”

Whatever Disney’s future might be, it’s a sad reality that the company is losing its credibility through movies like “Turning Red.” For parents who proactively monitor what their child is viewing, it’s likely time to say goodbye to today’s Disney if you want to protect your children from the grooming tactics of the left. We’re not dealing with Mickey Mouse anymore.

one dead, 20 hurt in mass shooting at Arkansas car show

US jobless claims up to 744K as virus still forces layoffs

A man drugged a woman who raped her in a phoenix