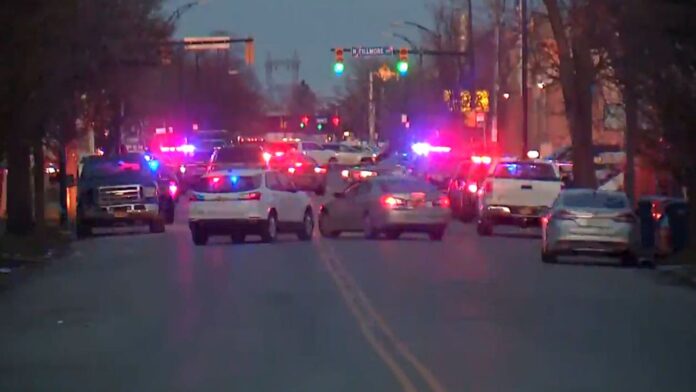 Three police officers and a suspect were shot during a car chase in which “numerous” rounds were fired, authorities in Buffalo, New York said.
The officers and one of the suspects involved in the gunfire exchange all sustained non-life threatening wounds, the Buffalo Police Department said. The pursuit began just before 6 p.m. when officers attempted to conduct a traffic stop.
The suspect vehicle took off and a chase ensued through various parts of the city, Police Commissioner Joseph Gramaglia told reporters.
“At some point… the suspect vehicle let somebody out of the car and then a short time after that started shooting at the police vehicle,” he said. “At numerous points along the way, the suspect vehicle continued opening fire, shooting at police vehicles.”
All three injured officers were in separate police vehicles, he said.
One officer was struck multiple times when a round went through the windshield of a police vehicle. Another police vehicle was fired upon, also injuring another officer. When the chase ended, gunfire was exchanged and a suspect was shot and was taken to a hospital to undergo surgery, Gramaglia said.
Another suspect was arrested. One of the officers injured was in surgery and remains in stable condition.
One officer sustained a gunshot wound to the arm and a graze wound to the ear. The third officer was saved by their bulletproof vest, authorities said.
“These suspects showed absolutely no regard for the community,” Buffalo Mayor Byron Brown said.
Gramaglia did not say what initiated the traffic stop and or how many rounds were fired. Erie County District Attorney John Flynn said his office is working with investigators to determine what charges may be filed.
“In order to piece it all together and to have a situation where we can press charges may not happen until a later date,” he said.

A pedestrian was killed on Dickerson Pike

Bush to headline fundraiser for Cheney after Trump backs foe

NTSB: Train that rear-ended another was on ‘full power’