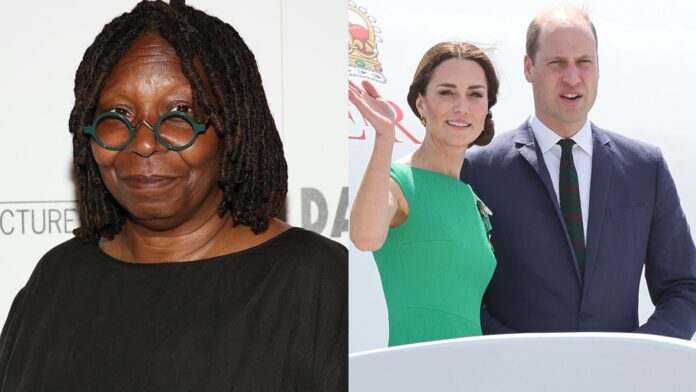 Whoopi Goldberg has demanded the British royal family to apologize for their colonial past, stressing that the crown cannot “ignore the fact that Britain ran roughshod over India for years, the co-host of “The View” slammed the monarchy when discussing the Duke and Duchess of Cambridge’s ongoing tour of the Caribbean.
“We cannot ignore the fact that Britain ran roughshod over India for years,” said the 66-year-old. “Let us not forget, when we talk about what needs to happen, all the folks that need to apologize.”
“Listen, this is not new,” the actress continued. “I suspect Charles, when he was in Barbados [in 2021] had some idea because he went on and apologized as he was releasing the hold that Britain has. So perhaps somebody is listening, and it’s the new group of folks – I don’t know if it’s Charles, William, but one of them is supposed to be the person.”
Goldberg’s comment came a day after Prince William expressed his “profound sorrow” over slavery and Britain’s role in it during a speech he delivered in Jamaica.
“I want to express my profound sorrow. Slavery was abhorrent. And it should never have happened,” the Duke of Cambridge said during a dinner hosted by the Governor-General of Jamaica at King’s House in Kingston.
“While the pain runs deep, Jamaica continues to forge its future with determination, courage and fortitude,” William continued. “The strength and shared sense of purpose of the Jamaican people, represented in your flag and motto, celebrate an invincible spirit.”
The 39-year-old also repeated words his father used in a speech he made in Barbados last year in which he condemned “the appalling atrocity of slavery, which forever stains our history.”
While William said he “strongly” agreed with his father’s words, he stopped short of apologizing.
The show’s co-host, Sunny Hostin, pointed out, “The Brits rarely, especially the royals, rarely talk about their history of enslavement. They rarely talk about how they got their wealth off the backs of Black people.”
Goldberg’s remarks came a month after she was suspended following comments made about the Holocaust. Goldberg was publicly criticized after she said the Holocaust was not about race, but rather about man’s inhumanity to others. She apologized, but ABC Newresident Kim Godwin told her to sit out for two weeks.
The Duke and Duchess of Cambridge have touched down in Barbados as they kick off the final leg of their Caribbean tour.
Despite the warm welcomes from many locals, the royal tour has been faced with controversy. During the couple’s visit to Jamaica, protesters gathered wearing T-shirts emblazoned with a pair of shackled Black wrists surrounded by the phrases “Seh Yuh Sorry!” and “Apologize now!”
The protest in front of the British High Commission in Kingston came a couple of days after dozens of prominent leaders in Jamaica publicized a letter demanding that Britain apologize and award its former colony slavery reparations.
They also decried the weeklong Central American and Caribbean tour that the Duke and Duchess of Cambridge embarked on Saturday, which coincides with Jamaica’s 60th independence anniversary and the 70th anniversary of Queen Elizabeth II’s coronation.
“Kings, Queens and Princesses and Princes belong in fairytales, NOT in Jamaica!” read one poster held aloft by a young girl who joined the protest.

Landslide crashes into homes on outskirts of Mexico City