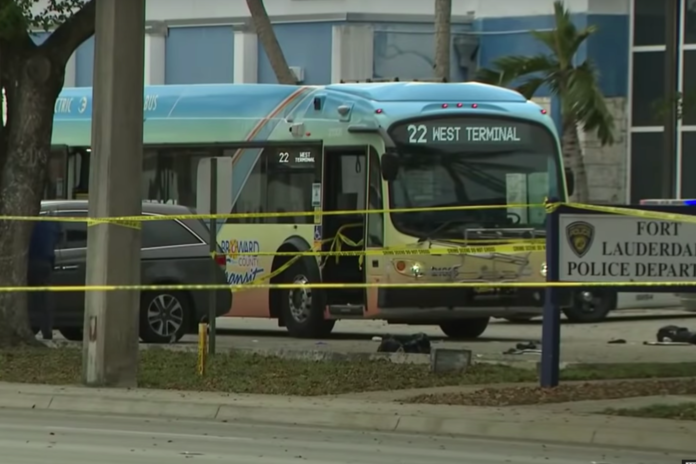 Two people were killed and two others were wounded after a gunman opened fire aboard a Florida transit bus on afternoon, a report said.
Three other people inside a pair of cars were also injured after their vehicles were stuck by the bus as its quick-thinking driver turned into a nearby police station after the gunfire erupted, the Sun-Sentinel reported, citing authorities.
The Broward County Transit bus was traveling along West Broward Boulevard in Fort Lauderdale at about 2:30 p.m. when the mayhem unfolded.
Once the driver made it to the precinct, officers raced up to the bus and arrested the suspect as the commuters aboard fled for safety.

The people came off the bus with their hands up, and the police just started running everywhere, coming from everywhere,” witness Natasha McGee, 44, told the newspaper.
It was unclear why the shooter opened fire.
One of the gunshot victims died at the scene. Another died at a nearby hospital. One of the surviving victims was listed in critical condition.
The three victims who were inside the cars were treated at the scene.
Police praised the bus driver for steering the bus to safety.
The bus driver in this particular case, her quick actions I am sure saved lives,” Acting Fort Lauderdale Police Chief Luis Alvarez said, according to the report.
“That is a difficult thing to do. Not many people would have behaved the way this bus driver behaved and to get to the front of the police station,” said Alvarez.
The suspect was not injured. Police did not immediately announce any charges.