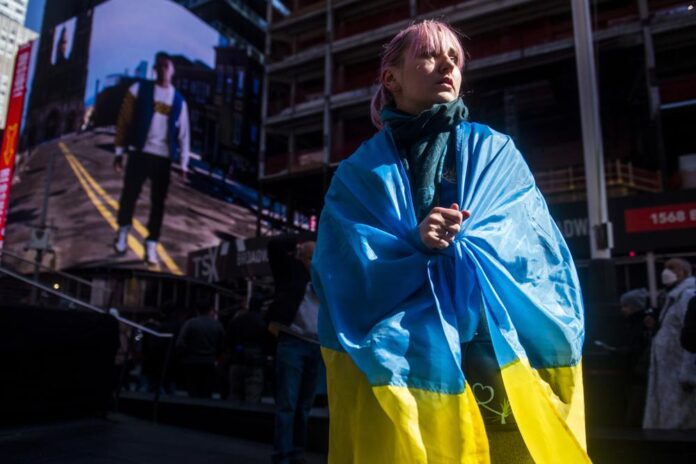 The United Nations says it has confirmed at least 240 civilian casualties, including at least 64 people killed, in the fighting in Ukraine that erupted since Russia’s invasion

— though it believed the “real figures are considerably higher” because many reports of casualties remain to be confirmed.

The U.N. Office for the Coordination of Humanitarian Affairs relayed the count from the U.N. human rights office, which has strict methodologies and verification procedures about the toll from conflict.

OCHA also said damage to civilian infrastructure has deprived hundreds of thousands of people of access to electricity or water,

and produced a map of “humanitarian situations” in Ukraine — mostly in northern, eastern and southern Ukraine.

The human rights office had reported an initial count by its staffers of at least 127 civilian casualties – 25 people killed and 102 injured – mostly from shelling and airstrikes.

French President Emmanuel Macron has asked his Belarus counterpart to demand that the country, Ukraine’s neighbor, quickly order Russian troops to leave.
In a phone conversation, Macron denounced “the gravity of a decision that would authorize Russia to deploy nuclear arms on Belarus soil,” a statement by the presidential palace said.

Macron told Alexander Lukashenko that fraternity between the people of Belarus and Ukraine should lead Belarus to “refuse to be a vassal and an accomplice to Russia in the war against Ukraine,” the statement said.

Belarus was one one of several axes used by Russia to launch attacks on Ukraine, with Belarus the point to move toward the capital Kyiv, a senior U.S. defense official has said.

Macron has pushed persistently to try to claw out a ceasefire amid the war, using the telephone to talk to all sides, diplomacy and sanctions by the European Union.

policeman kills a young man who tried to stab him