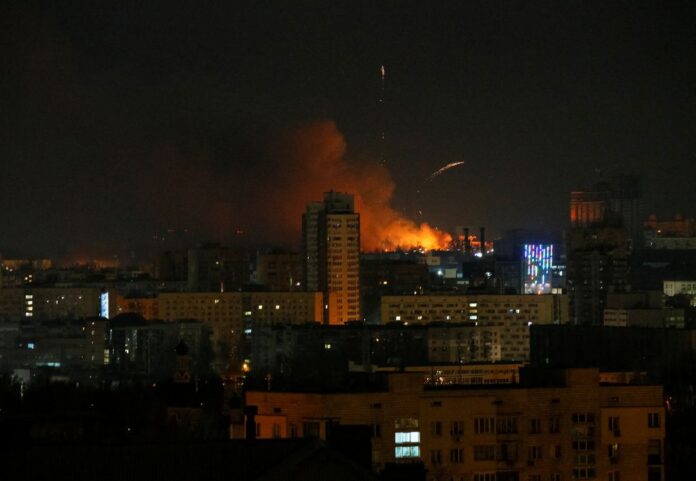 (Reuters) – Russian troops attacked an army base located on a main avenue in the Ukrainian capital of Kyiv but the assault was repelled, the Ukrainian military said early on Saturday.

Separately, the Interfax Ukraine agency said Russian soldiers were trying to capture one of the city’s electricity generating stations.

“Military criminals of Russia attacked one of the military units in Kiev on Victory Avenue.

The attack has been fought back,” the armed forces of Ukraine said in an English-language posting on Facebook.

It gave no details and the report could not immediately be confirmed. Peremohy, or Victory, Avenue is located just to the west of the centre of Kyiv.

Russian troops bore down on Ukraine’s capital Friday while the president grimly predicted that the conflict would soon intensify,

Amid reports of hundreds of casualties — including shelling that sliced through a Kyiv apartment building and pummeled bridges and schools — there also were growing signs that Russia may be seeking to overthrow Ukraine’s government, which U.S. officials have

described as Putin’s ultimate objective. It would be his boldest effort yet to redraw the world map and revive Moscow’s Cold War-era influence.

His country fending off explosions and gunfire, Ukraine President Volodymyr Zelenskyy appealed for a cease-fire and warned in a bleak statement that multiple cities were under

attack. “This night they will storm,” he said. For their part, U.S. defense officials believe the Russian offensive has encountered considerable resistance and is proceeding slower than Moscow had envisioned, though that could change quickly.
The Kremlin accepted Kyiv’s offer to hold talks, but it appeared to be an effort to squeeze

concessions out of the embattled Zelenskyy instead of a gesture toward a diplomatic solution.

China’s Didi denies report of plan to buy back shares