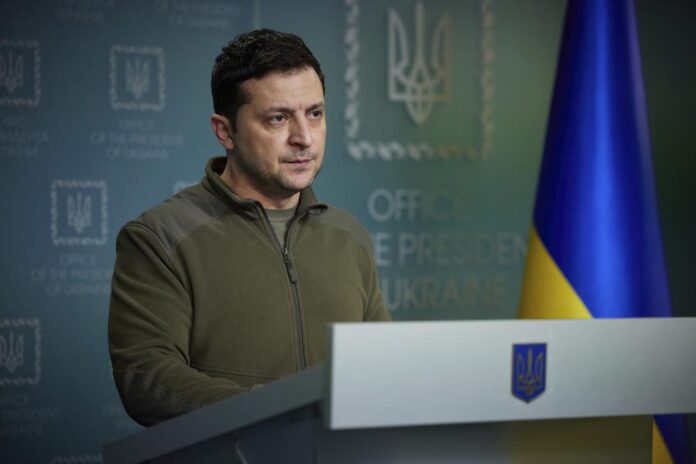 KYIV, Ukraine (AP) — Russian troops stormed toward Ukraine’s capital early Saturday as explosions reverberated through the city and the president urged the country to “stand firm” against the siege that could determine its future.

He refused American help to evacuate, saying: “The fight is here.”

Hundreds of casualties were reported in the fighting, which included shelling that sliced through a Kyiv apartment building and pummeled bridges and schools.

There also were growing signs that Russia may be seeking to overthrow Ukraine’s government, which U.S. officials have described as Russian President Vladimir Putin’s ultimate objective.

The assault represented Putin’s boldest effort yet to redraw the world map and revive Moscow’s Cold War-era influence. It triggered new international efforts to end the invasion, including direct sanctions on Putin.

As his country confronted explosions and gunfire, and as the fate of Kyiv hung in the balance, Ukraine President Volodymyr Zelenskyy appealed for a cease-fire and warned in a bleak statement that multiple cities were under attack.

“This night we have to stand firm,” he said. “The fate of Ukraine is being decided right now.”

Zelenskyy was urged to evacuate Kyiv at the behest of the U.S. government but turned down the offer, according to a senior American intelligence official with direct knowledge of the conversation.

The official quoted the president as saying that “the fight is here” and that he needed anti-tank ammunition but “not a ride.”

For their part, U.S. defense officials believe the Russian offensive has encountered considerable resistance and is proceeding slower than Moscow had envisioned, though that could change quickly.

The Kremlin accepted Kyiv’s offer to hold talks, but it appeared to be an effort to squeeze concessions out of the embattled Zelenskyy instead of a gesture toward a diplomatic solution.
The Russian military continued its advance, laying claim to the southern Ukraine city of Melitopol.

Still, it was unclear in the fog of war how much of Ukraine is still under Ukrainian control and how much or little Russian forces have seized.

As fighting persisted, Ukraine’s military reported shooting down an II-76 Russian transport plane carrying paratroopers near Vasylkiv, a city 25 miles (40 kilometers) south of Kyiv, an account confirmed by a senior American intelligence official. It was unclear how many were on board. Transport planes can carry up to 125 paratroopers.

The U.S. and other global powers slapped ever-tougher sanctions on Russia as the invasion reverberated through the world’s economy and energy supplies, threatening to further hit ordinary households. U.N.

officials said millions could flee Ukraine. Sports leagues moved to punish Russia and even the popular Eurovision song contest banned it from the May finals in Italy.

Through it all, Russia remained unbowed, vetoing a U.N. Security Council resolution demanding that it stop attacking Ukraine and withdraw troops immediately. The veto was expected, but the U.S. and its supporters argued that the effort would highlight Moscow’s international isolation.

The 11-1 vote, with China, India and the United Arab Emirates abstaining, showed significant but not total opposition to Russia’s invasion of its smaller, militarily weaker neighbor.

The meeting exposed Russia-Ukraine frictions, including when Ukrainian Ambassador Sergiy Kyslytsya requested a moment of silence to pray for those killed and asked Russian

Ambassador Vassily Nebenzia to pray “for salvation.” Nebenzia retorted that the remembrance should include people who have died in eastern Ukraine’s Donbas region. Pro-Russian separatists there have been fighting the Ukrainian government, which Russia accuses of abuses. A moment of tense silence did ensue.

NATO, meanwhile, decided to send parts of the alliance’s response force to help protect its member nations in the east for the first time. NATO did not say how many troops would be deployed but added that it would involve land, sea and air power.

A large boom was heard in the evening near Maidan Nezalezhnosti, the square in central Kyiv that was the heart of protests which led to the 2014 ouster of a Kremlin-friendly president. The cause was not immediately known.
Five explosions struck near a major power plant on Kyiv’s eastern outskirts, said Mayor Vitaly Klitschko. There was no information on what caused them, and no electrical outages were immediately reported.

US home prices rising at fastest rate in last 30 years