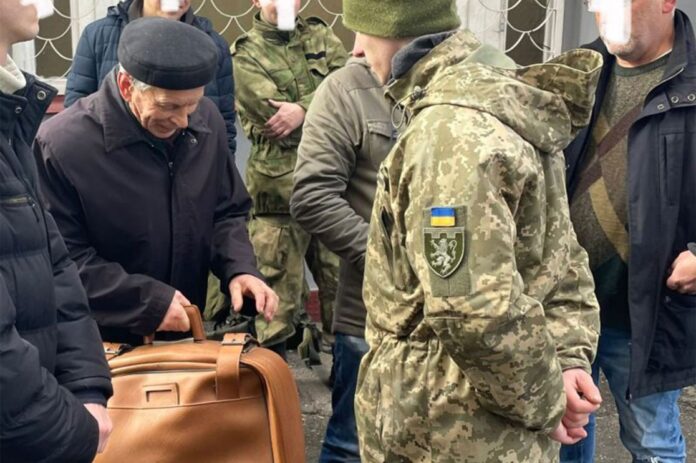 An 80-year-old Ukrainian man was photographed apparently trying to enlist in the army to fight for “for his grandkids.”

The widely circulated photo, shared on social media by former Ukrainian first lady Kateryna Yushchenko at night, shows the elderly man in a black cap approaching a Ukrainian soldier with a leather bag.

Someone posted a photo of this 80-year-old who showed up to join the army, carrying with him a small case with 2 t-shirts, a pair of extra pants, a toothbrush and a few sandwiches for lunch,” Yushchenko wrote.

“He said he was doing it for his grandkids.”

It’s not clear where the picture was taken, but it went viral as Russia advanced its attack on Ukraine, bearing down on the capital of Kyiv.

Yushchenko’s tweet has been favorited more than 230,000 times and retweeted more than 36,000 times by night, with social media users applauding the grandfather’s bravery.

Citizens across the country have taken up arms amid the Russian invasion.
Fighting-age Ukrainian men have been ordered to stay behind as tens of thousands of civilians flee the country.

Ukraine announced late Thursday that men between the ages of 18 and 60 were forbidden from leaving the nation, which has been under martial law since the start of the Russian invasion.

Many have been separated from their families who’ve evacuated on trains and buses and others were stopped by military authorities at the border.

Ukraine also expanded its military draft to include all women “fit for military service” between the ages of 18 and 60 as tensions with Russia rose last December.

On Feb. 1, President Volodymyr Zelensky signed legislation beefing up the country’s military with conscripts, transitioning to a professional army.

12 people killed by gunfire during a bank robbery