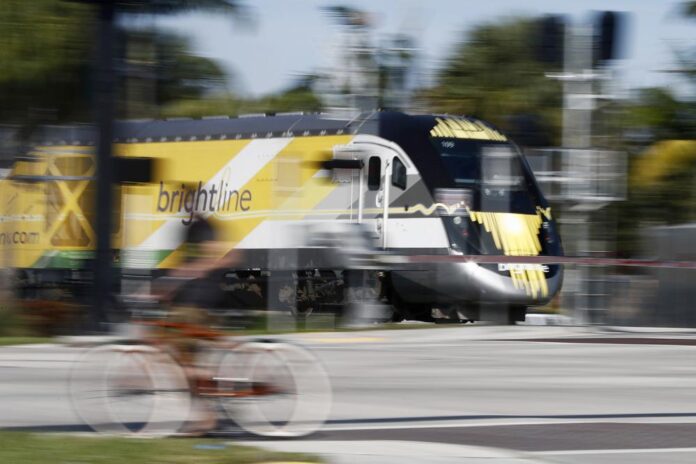 FORT LAUDERDALE, Fla. (AP) — Brightline trains killed one person and seriously injured another in separate accidents less than 12 hours apart, the latest in a spate of collisions plaguing the higher-speed passenger trains since the railroad recently resumed operations.

at night’s death was the ninth involving Florida’s privately owned passenger railroad since it resumed operations in November after an 18-month shutdown caused by the COVID-19 pandemic. It’s the 57th since Brightline began test runs in 2017, giving it the worst per-mile fatality rate in the nation, according to an ongoing Associated Press analysis that began in 2019.

Investigators found none of the deaths were the railroad’s fault, determining that many were suicides or drivers or pedestrians trying to beat the trains. The trains travel up to 79 mph (127 kph) through densely populated urban and suburban areas along about 70 miles (112 kilometers) of track between Miami and West Palm Beach that it shares with the Florida East Coast freight line.

Hallandale Beach police say a pedestrian was hit while attempting to cross the tracks about 7:30 p.m.

Brightline later released video taken from a camera inside the nosecone of a train that collided with a car at 6 a.m. on, leaving the driver hospitalized with serious injuries, according to the Palm Beach County Sheriff’s Office.

The video shows that the crossing barriers were down and the red lights were flashing when the driver turned from a side street and seemed to purposely go around the gate and into the train’s path. The crash split the car in two, according to the railroad. The sheriff’s office said a northbound freight train had just cleared the crossing on parallel tracks and the driver may not have seen the southbound Brightline train until it was too late.

Another driver was killed Sunday by a Brightline train after going around a crossing gate.

A Brightline statement said it released video as “an example of the dangers of disobeying rail crossings (and) to educate motorists and pedestrians in an effort to prevent future trespassing.”

The AP analysis shows that Brightline averages about one death for every 35,000 miles (56,000 kilometers) its trains travel, three times worse than the next mid-size or major railroad. According to police reports examined by the AP, investigators determined most of those killed have been suicides, drivers maneuvering around crossing barriers to try to beat the trains, or pedestrians who were intoxicated or mentally ill.

Among railroads that have logged at least 1 million miles over the past five years, central Florida’s SunRail has the second-worst death rate, averaging one for every 108,000 train miles (174,000 train kilometers). More than 800 people die nationally each year from train strikes, according to Federal Railroad Administration records.

In response to the accidents, Brightline has installed infrared detectors to warn engineers if anyone is lurking near the tracks so they can slow down or stop. The company also has added more fencing and landscaping to make track access more difficult, and is installing red-light cameras at crossings to enable police to ticket drivers who go around guardrails. It is testing drones to monitor the tracks.

Brightline is nearing completion of an extension that will connect West Palm Beach and Orlando. It has plans to eventually connect Orlando with Tampa. It is also building a line that will connect Southern California with Las Vegas.

Georgia inmates with violent histories, including 2 murder suspects, on the loose after escaping...