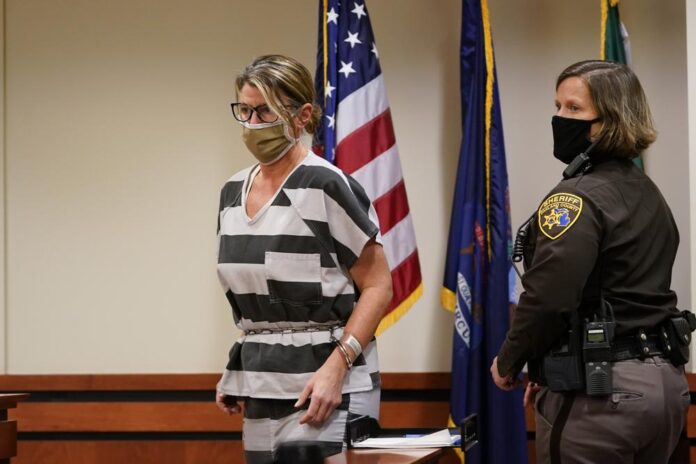 ROCHESTER HILLS, Mich. (AP) — A day before four students were killed at a Michigan school, the mother of the teenager charged with carrying out the mass shooting sent him a text message asking if he had showed teachers a “pic of your new gun,” an investigator testified.

The text was one of several between Jennifer and Ethan Crumbley on Nov. 29 after school officials left a voicemail informing her that the 15-year-old was looking up ammunition on his phone.

A judge must decide if there’s enough evidence to send Jennifer Crumbley and her husband, James Crumbley, to trial on involuntary manslaughter charges. It’s a low threshold under Michigan law, but this case is highly unusual because parents are rarely held criminally responsible for teens accused in mass school shootings.

The Crumbleys are accused of making a gun accessible to Ethan and failing to intervene when he showed signs of mental distress at home and at school. Four students were killed and others were wounded in the Nov. 30 attack at Oxford High School, which is roughly 30 miles (50 kilometers) north of Detroit,.

The school left a voicemail for Jennifer Crumbley the day before the attack informing her that a teacher was concerned about Ethan’s ammunition search on his phone.

In court, Ed Wagrowski, a computer crimes investigator in the Oakland County sheriff’s office, read aloud a series of texts exchanged between mother and son.

Her son replied: “Oh yeah. I already went to the office for that. All I did was look up a certain caliber at the end of class because I was curious. Completely harmless.”

“Did you at least show them a pic of your new gun?” Jennifer Crumbley asked.

The Crumbleys’ attorneys insist the couple didn’t know that their son might be planning an attack and that they didn’t make the gun easy to find in their home.

Prosecutor Karen McDonald said she aimed to show that the Crumbleys committed gross negligence and had an obligation to “protect the community.”

On the morning of the shooting, Jennifer and James Crumbley were summoned to the school and confronted with Ethan’s drawings, which included a handgun and the words, “The thoughts won’t stop. Help me.” Authorities said the parents refused to take him home and were told to get him counseling.

Amanda Holland, a co-worker at a real estate company, said Jennifer Crumbley shared a picture of the drawings when she returned to work from the school meeting.

“I told her I thought it was scary. She agreed,” Holland testified.

“I said it would be nice for her to take him for a day, go see a movie, go have lunch,” Holland said. “I said she should have brought him home. I thought it was a disturbing photo and this child needed to be around family.”

Jennifer Crumbley said “she felt like a failure as a parent,” according to Holland, who added that it seemed a “little sarcastic.”

Jennifer Crumbley’s boss, Andrew Smith, said she shared an image of the drawings with him, too, though he didn’t immediately look at it.

“She had said her son needed to get some counseling,” Smith testified. “I think she mentioned a family pet had passed away and a grandparent had passed away. She felt as if she was failing him, or a failure.”

Smith said he later heard Jennifer Crumbley “screaming down the hallway” after she learned of the shooting.

By late afternoon, she expressed concern about losing her job, Smith said.

“‘Please don’t judge me for what my son did.’ I was surprised by that text,” Smith told the court. “I was surprised she was worried about her job at that time.”

Ethan Crumbley is charged as an adult with murder and other crimes. His lawyers filed a notice of an insanity defense, which will likely freeze his case while experts examine him.

Drivers block tracks of Charlotte’s new Gold Line in less than 48 hours of...