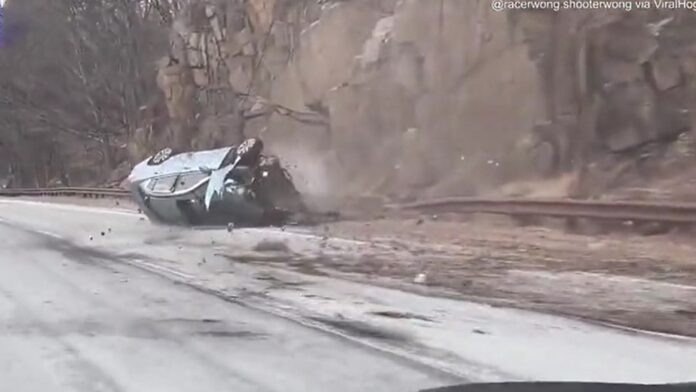 A feud between two New Jersey drivers ended when one lost control, veered off the road and flipped over, shocking new dashcam video shows.

The driver of a Honda Accord could be seen making aggressive maneuvers along Palisades Parkway in an attempt to pass a Ford F-150 Raptor that was in the far-left lane — traditionally the lane used for passing traffic.

The video started with the Accord in the right lane of a two-lane section of the interstate, initially speeding up to pass the truck. It was quickly forced to brake, however, as it approached a third vehicle blocked its way.

The car then slowed down and got behind the truck in the left lane and the two were seen tapping their brakes several times, the video showed.

As it approached an off-ramp and the interstate temporarily opened to three lanes, the car opportunistically sped up but again was prevented from passing the truck as another car was in the lane.

The video then showed the Honda Accord quickly accelerating, entering the on-ramp and pushing past one vehicle.

When the lane abruptly ended, the Honda went back onto the main roadway and seemingly attempted to squeeze between the Ford truck and another vehicle when it lost control, the video showed.

The car then was seen bumping into the two vehicles, spinning slightly, then swinging off the road where it hit a rail and the cliffside. The car’s momentum launched it airborne, where it flipped and landed on its back, the video showed.

The Raptor truck continued driving along the highway.

The driver who recorded the incident uploaded it to his YouTube account, Racerwong.Shooterwong, where he said the Accord driver almost hit him.

“This Accord nearly sideswipes me, then decides to play chicken with the Raptor almost hitting him,” the video’s description reads. “I guess that p—es the Raptor off and that’s when video starts.”

The motorist later told DailyMail.com that he spoke to Palisades Parkway Police, who informed him the driver in the crashed Accord was “okay,” the outlet reported.

Defense rests its case at murder trial of Kyle Rittenhouse