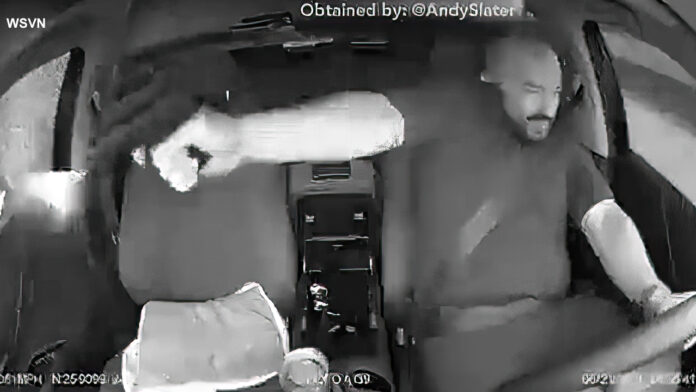 A Florida man was arrested after he allegedly opened fire during a road-rage shooting in June and authorities from Miami-Dade released chilling new dashcam footage of the incident.

The June 21 incident occurred on I-95 in northwest Miami-Dade after it is believed Eric Popper, the man arrested, cut off another driver, WSVN reported. The other driver, who was not identified, tailgated Popper, and hand gestures between the two were exchanged.

Local 10 reported that state troopers and Popper’s lawyer disagree on what happened next.

Robert Gershman, the 30-year-old’s lawyer, told the outlet that the video is proof that his client was shot at first, and he returned fire in self-defense.

“On the video, you can hear and see the other driver shoot his car,” Gershman said, pointing out that his client heard the sound prior to shooting.

The driver of the Camry did not have a gun in his vehicle but admitted to throwing a water bottle at Popper’s SUV, investigators said. Popper fired the gun 11 times at the other driver, through his own window and windshield, WSVN reported, citing investigators.

Popper pulled off the highway and called law enforcement. He later turned himself in to the Florida Highway Patrol, provided the dashcam video, and resigned from his job as a civilian fire inspector with Miami Beach Fire Rescue,

The video was first obtained by radio host Andy Slater.

Popper was previously arrested in 2012, but his charges were dropped, NBC 6 reported. He now faces two second-degree felony charges for this incident, authorities said.

Dashcam footage road rage incident in South Florida shows the moments when a driver fired multiple shots, striking another vehicle several times. But his lawyer is calling the shooting a “justified” response.

WSVN reports that Eric Popper, who was a civilian fire inspector with Miami Beach Fire Rescue at the time, was driving southbound on Interstate 95 in Miami-Dade County

Investigators said he changed lanes, cutting off another driver. Popper’s dashcam video shows the driver behind honking, which caused Popper to curse before slamming on his brakes.
Authorities said the other driver then tailgated Popper’s SUV before pulling up next to Popper, who could be seen removing a handgun from his center console and motioning it toward the right-side passenger window.

He opened fire on the other car, firing off a total of 11 shots. Popper said he was fired at first, and used his weapon in self-defense.

In the 911 call Popper makes at the end of the footage, he tells the operator, “I was just shot at, my car was just hit, I returned fire back at the individual.”
However, according to the Florida Highway Patrol’s arrest report, the other driver said he threw a water bottle at Popper’s car and said he did not have a firearm.
Popper faces felony charges including aggravated assault with a firearm.

Popper later turned himself in to authorities and resigned from his position at Miami Beach Fire Rescue.
Popper’s attorney, Robert Gershman, told Storyful in an email that his client was not guilty and was justified in his actions. According to Gershman, the sound of the water bottle hitting the car caused Popper to act in self-defense.