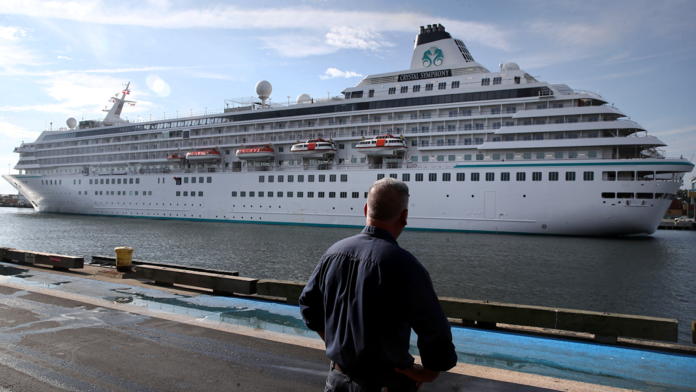 A cruise ship with hundreds of passengers and crew diverted its destination path from Miami to the Bahamas to reportedly evade a U.S. warrant over $1.2 million in unpaid fuel bills.

“The U.S. marshal will be there with the arrest warrant if the ship shows up in Miami,” J. Stephen Simms, the lead attorney representing Peninsula Petroleum Far East Pte. Ltd, told Bloomberg. “My good money is that it’s not landing in Miami, from what we’ve been told. Our client is determined to recover.”

The luxury cruise ship, Crystal Symphony, was scheduled to port in Miami on Saturday after a two-week sojourn in the Caribbean, but diverted to the Bahamas with about 300 passengers and 400 crew members after a U.S. court issued an arrest warrant.

The ship is operated by Genting Hong Kong Ltd., which has been financially struggling since the pandemic affected travel. Peninsula Petroleum Far East filed suit in the U.S. to recover $4.6 million in unpaid fees for bunker fuel for three different ships owned by Genting, including $1.2 million from the Crystal Symphony, the Daily Mail reported.

A British musician who was performing on the ship said the passengers are scrambling to reschedule their flights after being delayed in the Bahamas, but “there’s no panic.”

“Every one of these people are trying to reschedule their flights,” musician Elio Pace told the Daily Mail. “There’s no panic, there’s no tantrums going on, they’re taking it in their stride.”

Genting Hong Kong on Wednesday filed with the Supreme Court of Bermuda to appoint provisional liquidators after exhausting “all reasonable efforts” to negotiate with creditors, according to Bloomberg. The company reported in May that it lost $1.7 billion as the pandemic and shutdowns continued affecting the travel industry.

Crystal Cruises notified staff on the Crystal Symphony on Wednesday that all cruise operations will be suspended until at least April.

“This was an extremely difficult decision but a prudent one given the current business environment and recent developments with our parent company, Genting Hong Kong,” Jack Anderson, Crystal’s president, said in a statement on the decision to cease all cruises, according to the Daily Mail.

Pace said passengers were shocked when the announcement was made, but that he still performed and operations continued as usual.

“That was quite extraordinary, to be in a position to have to perform to people, with them knowing the cruise line has gone into liquidation,” he said. “This was a shock to everybody when we got the announcement on Wednesday.”

The ship docked in Bimini just before midnight local time on Saturday. Passengers are expected to be ferried to Fort Lauderdale from the Bahamas.

“For me it’s a headache, but for the crew, for the staff, the brilliant staff of this gorgeous luxury liner, I feel more sorry for them,” Pace added. “I’m put out, but they’ve lost their jobs for the foreseeable future.”

Crystal Cruises did not immediately respond to Fox News’ request for comment on the matter.

Man jailed 32 years for raping and sexually assaulting his daughter at knifepoint in...

‘It gives me hope.’ Number of COVID vaccinations slowly begin to increase in Charlotte...

A former flight attendant who had sex with a 15-year-old boy, was released after...