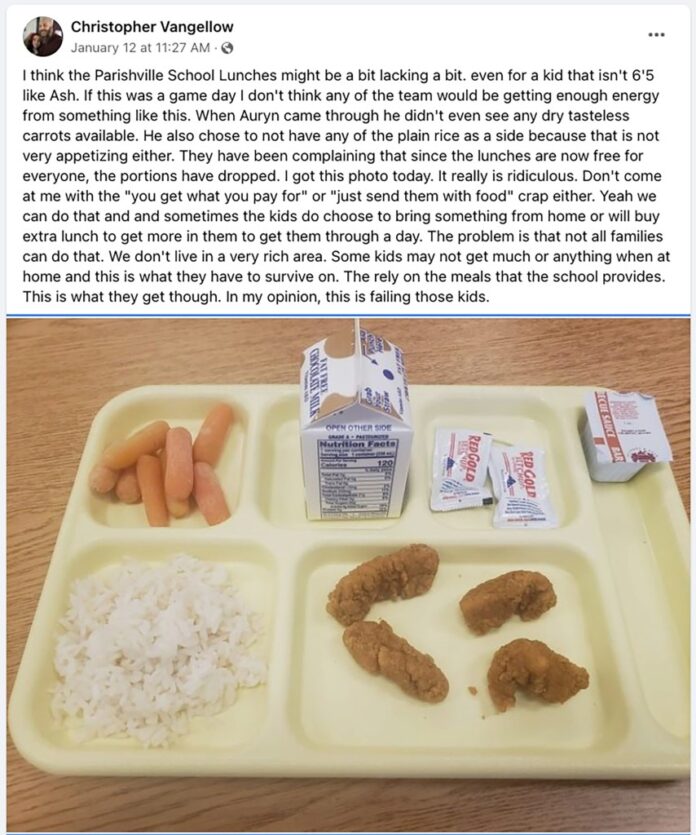 Even Rikers Island has better food than this.

An upstate New York school has prompted outrage after a father shared a photo of his son’s meager cafeteria offerings.

Chris Vangellow, whose children attend the Parishville-Hopkinton Central School District, shared a photo to Facebook blasting the unsavory-looking meal, which consisted of a few scrimpy chicken nuggets, some off-color carrots and a small side of white rice.

“I got this photo today.

It really is ridiculous. Don’t come at me with the ‘you get what you pay for’ or ‘just send them with food’ crap either,” the Potsdam father of four wrote on Facebook.

“The problem is that not all families can do that. We don’t live in a very rich area. Some kids may not get much or anything when at home and this is what they have to survive on.”

Jailhouse sources on Rikers Island took a look at Vangellow’s photos Wednesday and said even the inmates are eating better than that.

“Jail is better, but not by much,” a source quipped.

“It’s sad and pathetic, but typical of government,” they said of the school’s poor offerings.

Sources said detainees receive three meals a day that are more substantial than what the kids are getting and detailed some typical jailhouse fare.

“It’s better than school lunch,” another source quipped. “It tastes like the KFC baked chicken.”

A pair of Brooklyn high schoolers blasted their own school lunches prepared at city public schools and said they often choose to go without over noshing on “mad hard” chicken and “old” bread.

“I personally don’t eat school lunch because it’s not appealing to me at all. I feel like it’s disgusting,” Hawafadima Camara, a 16-year-old junior at Achievement First Brooklyn High School in Crown Heights, told The Post Wednesday after class.

One Big Apple student took a photo of a lunch stuffed into a plastic bag that was given Wednesday at the NEST+m public school on the Lower East Side, which consisted of a cheese sandwich, apple sauce and a random snack.

“Yes, they may be low on budget, but at least give us something that’s hot and fresh,” Camera said.

Jayden Villega, an 18-year-old senior at the Williamsburg High School for Architecture and Design, lamented the poor nutritional value of the meals his school serves.

“It seems to be very mediocre and not really promoting a healthy diet as it’s advertised to do,” Villega said.

“It’s often hamburgers and fries or chicken nuggets and fries.”

“In fairness to the cafeteria, students are allowed one more serving of fruits or vegetables and one additional nugget than appeared in the photograph; however, this doesn’t alter the message that many students and parents are dissatisfied with school lunches,” Collins wrote on Facebook.

“The Cafeteria Manager and I are creating a group to address the dissatisfaction with school meals,” he said. “This group will explore ways to make school meals more appetizing while still meeting the strict USDA requirements of the National School Lunch Program.”

1 killed in East Texas crash of a small plane