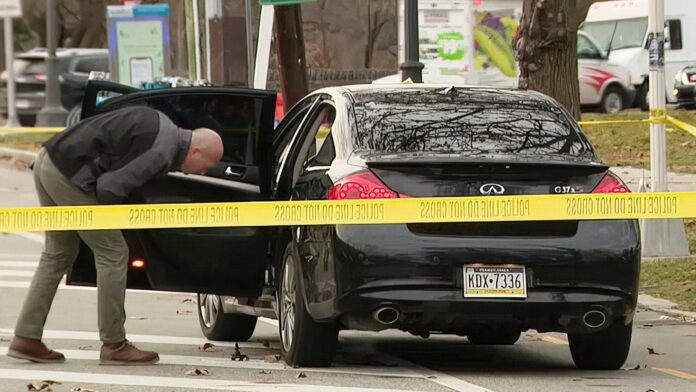 A Philadelphia homeowner with a license to carry walked out on a trio of thieves while they were attempting to steal his car at morning, shooting and killing one suspect, according to local reports.
The attempted car theft unfolded around 8:17 a.m. on the 5800 block of Cobbs Creek Parkway when three unknown men approached the victim’s vehicle, FOX26 Philadelphia reported, citing police.
The suspects tried to attach yellow cables to the car to tow it away, but were caught when the homeowner came outside, WPVI-TV reported, citing sources.
The victim, who legally carried a firearm, shot one of the suspects who was only identified as a 52-year-old male, police said. The suspect was rushed to Penn Presbyterian Medical Center, where he died of his injuries.
During the attempted theft, the victim’s car broke off from the attached cables and rolled into the side of a school bus, the sources told the station. No further injuries were reported.
Students were on board the bus at the time and were seen being taking off and boarding another bus following the incident, WCAU-TV reported.
Philadelphia police told Fox News that the incident is still under investigation and would release more information when available.
The attempted car theft follows a series of similar incidents in which victims turned the tables on would-be car thieves in Philadelphia.
a 60-year-old man with a license to carry shot a 16-year-old male who attempted to carjack him, FOX26 reported. The victim told police that the teen and an accomplice had pointed a gun in his face before he drew his own weapon and exchanged gunfire. The teen was wounded and later arrested.
Last week, a 32-year-old victim, who also carried a firearm legally, was sitting in his car when an armed 18-year-old suspect pointed a gun at him. The victim fired through the car window, hitting the suspect multiple times. The 18-year-old was later arrested.
A third incident happened on Jan. 3 when two men carjacked a Lyft driver who had a license to carry a firearm. The driver shot both suspects, who were each wounded and arrested shortly after the incident.
Philadelphia Police Commissioner Danielle Outlaw last week called the uptick in carjacking incidents “one of the more disturbing trends that we have seen.”
Philadelphia police said they have received nearly 90 reports of carjacking incidents since the start of the new year. There were 757 carjackings reported in all of 2021, up 34% from the year prior.
Police have said they have contributed more resources to fighting an uptick of carjackings.

A 13-year-old boy in Pennsylvania is charged with overfilling the death of his younger...

A man is shot and killed at a Detroit gas station after an altercation...