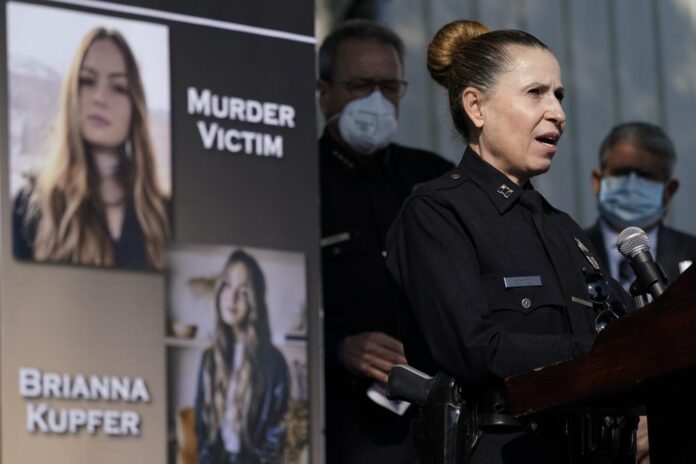 LOS ANGELES (AP) — A man suspected of attacking and killing a 70-year-old woman at a Los Angeles bus stop was charged with murder, while LA officials offered a $250,000 reward in the unrelated stabbing death of a 24-year-old woman across town.

Sandra Shells was attacked at a downtown bus stop near Union Station while on her way to work as a nurse at LA County-USC Medical Center, the district attorney’s office said in a statement.

Shells fell backward and hit her head on the ground. She died at a hospital.

The Los Angeles Times reported that a homeless man was arrested not far from the station and booked for investigation of attempted murder.

Kerry Bell, 48, was charged with murder in Shells’ death. It wasn’t immediately known if he has an attorney.

Meanwhile a $250,000 reward was offered for information leading to the arrest of a man suspected of stabbing Brianna Kupfer while she worked at a furniture store.

The suspect, wearing all black clothing and a face mask, was last seen walking in the alley behind the store in the Hancock Park neighborhood.

“Detectives have determined the suspect was not known to the victim and was a random walk-in to the store,” police said. “The suspect attacked the victim with a knife and fled the scene through the back door.”

Police late Tuesday said they were looking for 31-year-old Shawn Laval Smith, a transient who has been seen in several Southern California cities along with San Diego and San Francisco.

“He should be considered armed and dangerous,” an LAPD community alert said. “If seen do not approach call 911.”

Two dead and one wounded after overnight shooting in the Bronx

One dead, one injured after Rapid City motel shooting