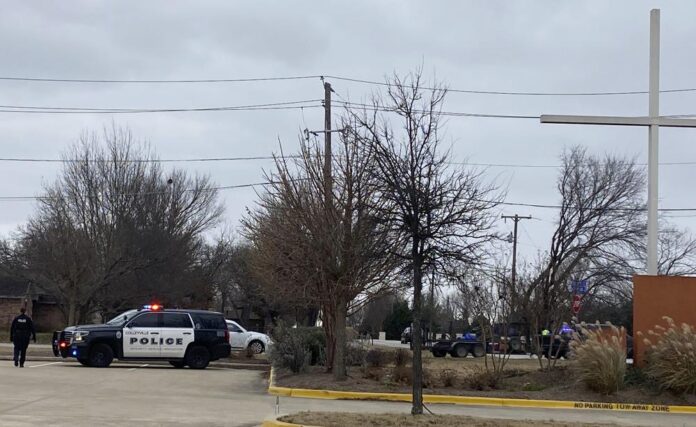 At least four people are being held hostage in a synagogue in Colleyville, Texas, a law enforcement source confirmed.

The FBI’s crisis negotiating team has made contact with the suspect and established communication.

No injuries have yet been reported at the Congregation Beth Israel in Colleyville, which is a suburb of Dallas-Fort Worth.

A source close to the incident told CBS News that they believe the suspected hostage taker has asked for the release of Aafia Siddiqi from federal custody.

White House Press Secretary Jen Psaki said President Biden has been briefed on the incident. The U.S. ambassador to Israel, Tom Nides, tweeted that he is “closely monitoring” reports of the situation and is “praying for an immediate and safe end.”

Authorities say a man apparently took hostages during services at a synagogue near Fort Worth, Texas.

The Colleyville Police Department tweeted afternoon that it was conducting SWAT operations at the address of Congregation Beth Israel.

At least four hostages were believed to be inside the synagogue, according to two law enforcement officials who were not authorized to discuss the ongoing investigation and who spoke to The Associated Press on the condition of anonymity. The synagogue’s rabbi was believed to be among the hostages, one of the officials said.

FBI Dallas spokeswoman Katie Chaumont said an FBI SWAT team was also at the scene and that crisis negotiators had been communicating with someone inside the synagogue. But she could not say whether the person was armed and she declined to describe what the person had said to authorities, citing operational sensitivity.

Police were first called to the synagogue around 11 a.m. and people were evacuated from the surrounding neighborhood soon after that, Chaumont said.

There have been no reported injuries, Chaumont said.

“It’s an evolving situation, and we have a lot of law enforcement personnel on scene,” Chaumont said.

Law enforcement shut down access to the roads surrounding the synagogue Saturday afternoon.

The services were being livestreamed on the synagogue’s Facebook page for a time. The Fort Worth Star-Telegram reported that an angry man could be heard ranting and talking about religion at times during the livestream, which didn’t show what was happening inside the synagogue.

Shortly before 2 p.m., the man said, “You got to do something. I don’t want to see this guy dead.” Moments later, the feed cut out.

The man, who used profanities, repeatedly mentioned his sister, Islam and that he thought he was going to die, the Star-Telegram reported.

Colleyville, a community of about 26,000 people, is about 15 miles (23 kilometers) northeast of Fort Worth.

2 men wounded after exchanging gunfire during break in

Hostess assaulted at Carmine’s on Upper West Side after asking tourists for vaccine cards:...