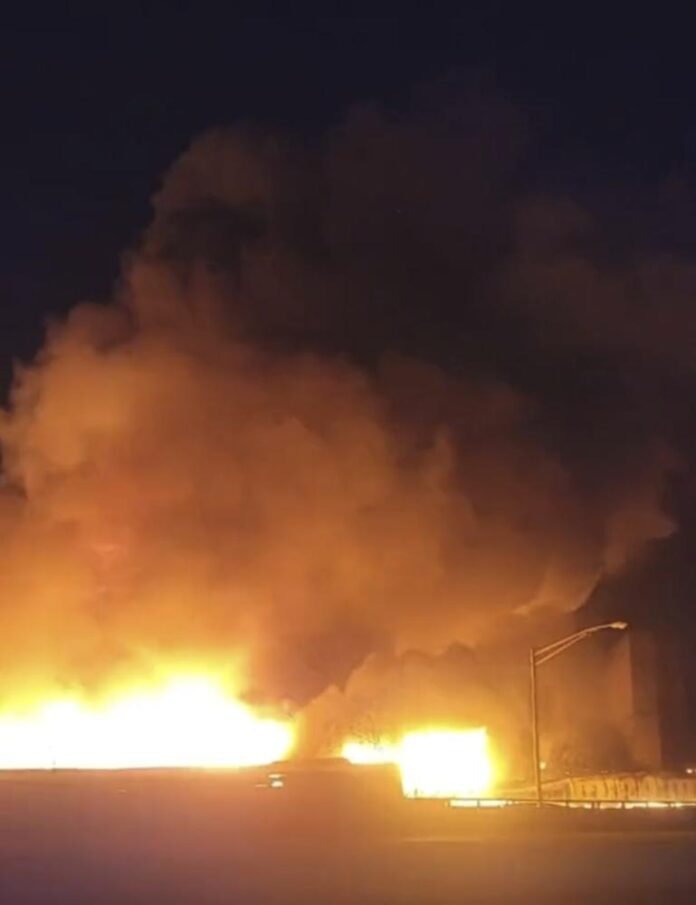 PASSAIC, N.J. (AP) — A large chemical fire burned through the night and into morning in northern New Jersey, its smoke so heavy that it was detected on weather radar and seen and smelled in neighboring New York City.

The fire at Majestic Industries and the Qualco chemical plant in Passaic spread to multiple buildings and threatened their collapse, officials said.

Water from firefighter hoses froze in cold weather and made the environment slick and hazardous for responders.

“There have been bad fires, but this is the worst that I’ve ever seen,” Passaic Mayor Hector Lora told NorthJersey.com.
Security guard Justin Johnson told WCBS-TV he was working alone, checking water pressure, when he noticed smoke coming from a smokestack-like tower. He wasn’t sure what to make of it but called the fire department as alarms went off.

The fire was in buildings housing plastics, pallets and chlorine, officials said, but Fire Chief Patrick Trentacost said the part where most of the chlorine was stored appeared to under control.
Residents near the blaze were advised to close their windows but were not required to evacuate, with officials saying air quality remained acceptable and would continue to be monitored.

Some residents fled nonetheless.
“It’s worrying. You don’t know what’s going to happen,” Joel Heredia said
One firefighter was taken to a hospital after being struck by debris, officials said. He was doing well, though other firefighters slipped and fell in the slick conditions, officials said.

Uncertain future for some as Haitian migrant camp closes

6 dead, including a police officer, in New Jersey shooting