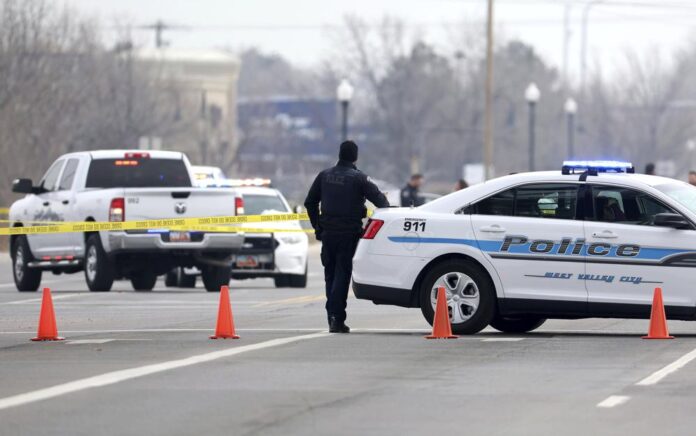 two young people were shot and killed on a sidewalk at morning and another young person was hospitalized in critical condition. Four teens are in police custody in connection with the shooting.

The shootings took place about 10:50 a.m. along 4100 South, between the northbound and southbound lanes of the Mountain View Corridor, according to the West Valley police.

Police believe two groups of students who knew each other began a physical fight along the south side of 4100 South before the gunshots rang out. The suspects in the shooting then ran away from the scene, said West Valley police spokeswoman Roxeanne Vainuku. Investigators don’t know exactly why the two groups were fighting, they just know it was over some kind of dispute, she said.

West Valley police said the two people killed in the shooting are 14- and 15-year-old boys, and that a 15-year-old boy is still in critical but stable condition, the agency tweeted. The department added, in a separate tweet, that the names of the boy who were killed might be released as early as night.

Initially, police said three people were taken into custody. However, police later announced that a fourth person was arrested. Police say three of boys arrested are 14-year-olds and the other is 15. A motive for the shooting was still unknown as of Thursday afternoon, as the investigation was ongoing. Police said they believe there was no continuing threat to the public.

“As far as I know, the people involved are high school students,” Vainuku said, adding that police were in the process of notifying family members of the deceased.

The shooting investigation is expected to take several hours, meaning closed roads and traffic delays for those in the area.

The shooting led several nearby schools to temporarily shelter in place, including Hunter High School, Hunter Junior High School, Hillside Elementary School and Whittier Elementary School. Those orders were lifted just after noon, except for Hunter High. Students there were released from classes and allowed to go home around 12:45 p.m., according to school district spokesman Ben Horsley.

He said the district has also brought in grief counselors to help students in need.

“Our hearts are broken that this occurred,” Horsley said.

During shelter-in-place protocols, all exterior doors of the school are locked and no one is allowed on or off the school campus, according to the district. Any outdoor activities are brought inside, and school administrators or police are stationed outside the building. While the outside doors may be locked down, classes inside the building continue as normal.

Man shoots wife, then himself inside Texas doctor’s office