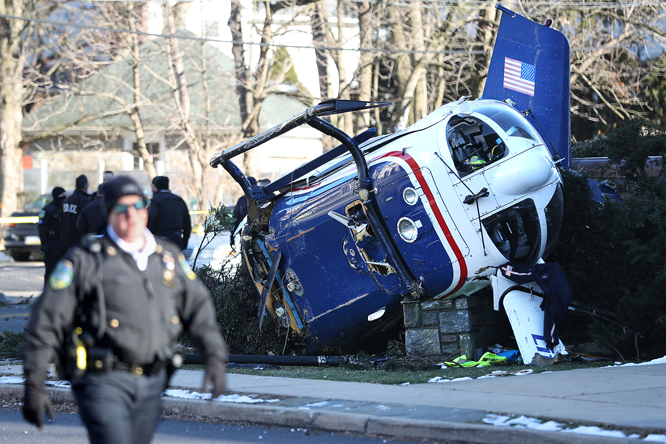 A medical helicopter carrying a child patient crash landed outside Philadelphia at afternoon – but all four people on board are expected to survive in what one official called “an absolute miracle.”

The medevac chopper crashed around 1 p.m. near Drexel Hill United Methodist Church in Delaware County on its way to the Children’s Hospital of Philadelphia from Maryland.

Authorities said the passengers — the pilot, two crew members and an infant patient — were able to pull themselves out of the wreck

The infant was taken to the Children’s Hospital of Philadelphia, but family members had not yet been notified, Upper Darby police Superintendent Timothy M. Bernhardt said at a press conference.

“It’s a miracle, it’s an absolute miracle, here what you see behind me,” Bernhardt said.

Officials described the incident as a “controlled landing” as the pilot managed to avoid utility lines and other hazards on the way down. The helicopter hit the street and bounced, then toppled over, sliding into some bushes near the church. A stop sign on the corner of the street was broken in two, according to the Associated Press.

Witness video moments after the crash showed the smoking helicopter on its side in front of the church as emergency workers run toward the wreckage.

“Our utmost respect goes out to the pilot/crew of the helicopter, as all of them continued to provide care and direction for their patient and for their fellow crew members, despite their own injuries,” the Upper Darby Professional Firefighters said in a Facebook post.

There was no information on what caused the crash at about 4 p.m., the Upper Darby Professional Firefighters said in a Facebook post. But it is believed to have experienced mechanical problems, the Pennsylvania Emergency Management Agency told The Associated Press.

Witness Jarrell Saunders, 28, said he saw the aircraft “just floating, like real low, like extremely low, like it could land on the building that I work at.”

He works at an apartment building nearby.

Saunders said he saw the chopper hit the ground in the middle of the road and then slide across the ground until it crashed into the church.

“I’m telling my grandkids about this one,” he said.

Florida man tried to get a ballot for a dead wife