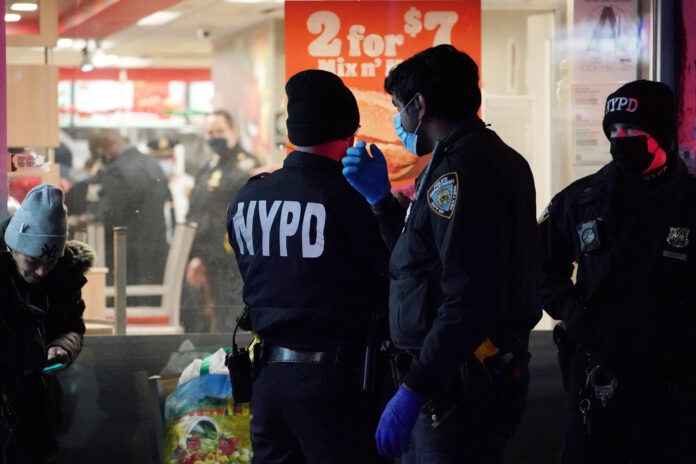 A teen who had just started working at a Manhattan Burger King — and already wanted off the late shift because she was so scared — was fatally shot in the stomach over $100, cops and kin said.
The armed robber entered the restaurant at 116th Street and Lexington Avenue in East Harlem around 1 a.m. and pistol-whipped a male customer before punching a female manager in the face, police said.

Tragic cashier Kristal Bayron-Nieves, 19, gave the robber cash from the drawer, an eyewitness said, according to her mother. The criminal then turned to leave but whipped around again and shot Bayron-Nieves in the torso, the witness said
The killer got away with just $100, the victim’s family said.
The teenager was taken to Metropolitan Hospital, where she was pronounced dead a short time later, cops said.

“She didn’t deserve to be mowed down while working at a Burger King,” a police source said.
Bayron-Nieves’ family said she had only been working at the fast-food eatery for three weeks and had already asked for better security and change to a day shift because she feared for her safety.
The victim wanted the changes “because she is only 19, and she has more than 50 homeless people sleeping in front of the store,” her mother, Kristie Nieves, 36, said in Spanish through a translator, friend Nathalie Pagan.
Nieves is torn because she convinced her daughter to continue going to work.

Kristal] say [Friday], ‘I don’t want to go. I’m scared,’ ” the heartbroken mom said. “I say, ‘You have to go and be responsible.’ At 10 p.m. I wake her up to go and tell her, ‘You have to go. You have to be responsible. You have to get a better life.’ “
Pagan said the mom “feels guilty about that. That’s what she tells me earlier, that she feels guilty because she wakes her up to go.”
Pagan said Bayron-Nieves had a young admirer who stopped by to see her at the restaurant almost nightly, always bringing her a flower. The young man was there when she was killed.
He told us he was there until her last breath,” Pagan said. “He tells us when he went and walk to the place that he always buy her a flower. He went back, and they open the door to this guy that was dressed like them, in all black.”
Pagan said Bayron-Nieves mistook the thief for a delivery man — before he slugged the restaurant manager and her young admirer, knocking him out.
She said Bayron-Nieves then gave the thief all the money in the register, which amounted to $100 in petty cash, the typical amount to start the next day.

“So [the admirer] says that the guy turns around and he comes back and shot her,” Pagan said. “That he turn around like he is going to leave, but he comes back and shoots her.
She’d done everything that he say,” she said. “She give him the money and everything. That she didn’t even do nothing wrong.”
The robber, who fled the store, was described as a slim male who was wearing dark clothes and a black mask, cops said. Police were canvassing the scene for video.
On Sunday, Crime Stoppers offered a $3,500 for the killer’s capture, putting up wanted posters with a surveillance photo of the killer.

Child Plays Dead Then Calls For Help After 3 Family Members Shot And Killed...