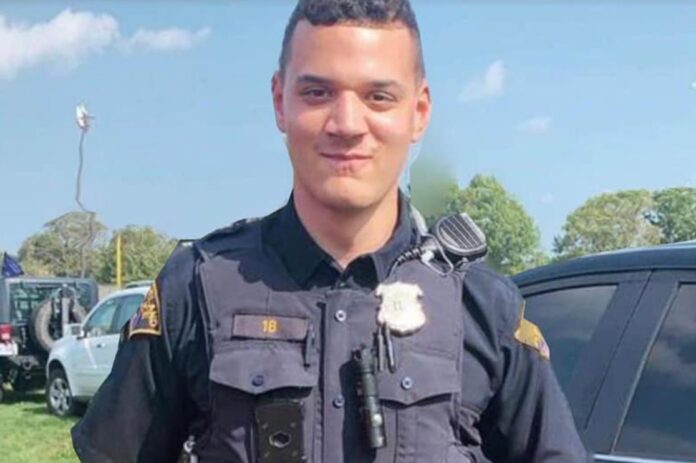 CLEVELAND (AP) — An off-duty Cleveland police officer was shot and killed in a parking lot carjacking, and multiple people were arrested, authorities said.

Someone approached Officer Shane Bartek, 25, at an apartment building on Cleveland’s west side around 6 p.m, police said. There was a struggle, and the officer was shot twice, police said.
The carjacker fled in the officer’s vehicle, police said. Bartek was pronounced dead at Fairview Hospital.

The vehicle was tracked down in suburban Euclid, and one person was arrested, police said. More suspects were arrested later, according to police, who did not provide a number.
No charges were immediately filed, but police said that an aggravated robbery motor vehicle case had been opened, that searches were conducted and that suburban agencies were also pursuing felony charges, police said.
Bartek had been hired by the Cleveland police in August 2019.

“My heart is aching for the family, for our officers. Senseless. It just doesn’t make any sense,” incoming Police Chief Wayne Drummond said outside the hospital at evening.
Cleveland police were joined by officers from nearby agencies for a procession in his honor morning.

It’s the first fatal shooting of a Cleveland police officer since detective James Skernivitz was shot and killed in September 2020 during an undercover drug operation. A police informant was also killed.

Lincoln County man suffered through COVID, now pleading for others to get vaccine after...