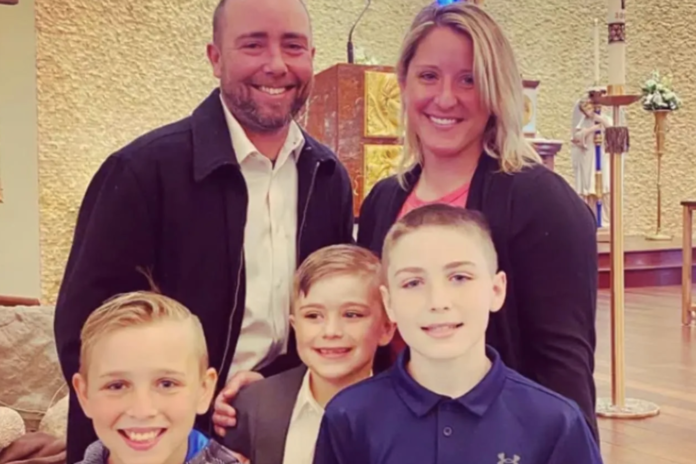 A Pennsylvania father and two of his sons were killed in a Christmas morning fire that was believed to have been started by lights on the family’s Christmas tree.
Eric King, 41, and children Liam, 11, and Patrick, 8, died when the fast-moving blaze tore through their Quakertown home around 1:20 a.m., according to the Bucks County Courier Times.
Two dogs were also reportedly killed. The wife and mother of the victims escaped with her oldest son, the article said
“The evidence is very clear that it started in the Christmas tree. It was a real tree,” Quakertown Police Chief Scott McElree told the newspaper. “A Christmas tree burns very quickly and very hot.”
The fire destroyed the Kings’ home as well as the twin house attached to it, according to the article.
The family next door was reportedly able to escape unharmed.

More than $350,000 had been donated in less than a day for the family, who was very active in the town’s youth baseball program, according to an online fundraiser.
“Eric and Kristin were high school sweethearts and the happiest people you will have ever met,” organizer Kristin Randazzo wrote.

“They were always smiling and full of positive spirits, you just couldn’t help but to love them. The three boys, Eric and Kristin were all a huge part of the Quakertown Youth Baseball Association and spent their days and nights at the baseball fields.”
The Quakertown school district said the Kings are “the kind of people who make this a special place to live and attend school” in a statement posted to Facebook
“It’s horrendous,” McElree reportedly said. “This impacts us all.

This impacts our community, our families in general, the kids in the schools and the people who know the King family. We’re partners in this and we and the school district will do what we can to support everyone.”

Morton Potters set up for success with 2 senior setters