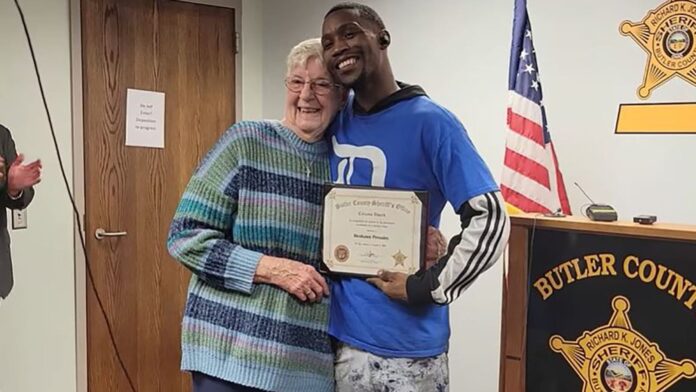 A good Samaritan in Ohio received an award after he answered an 87-year-old woman’s calls for help at a Kroger grocery store when a man snatched her purse in the checkout line earlier this month.

Deshawn Pressley jumped into action on Dec. 5 and chased the purse-snatcher out of the store in Lemon Township and into the parking lot.

Security footage shows Pressley taking down the suspect in the parking lot and making a citizen’s arrest.

Pressley was also reunited with Pat Goins, the woman whose purse was snatched.

“I’m glad that he received this honor because he’s my hero,” Pat Goins said

Pressley told reporters during the ceremony that he was with his 1-year-old daughter when he struck up a conversation with Goins moments before the attempted robbery. When the two went into separate checkout lines, Pressley said the would-be thief made his move.

“I heard her screaming and yelling … it was the yell that I need help,” Pressley said. “And I just turned around and did what I needed to do as a citizen.”

When a reporter asked Pressley whether the suspect, later identified as 58-year-old Derek Vauhn, was surprised to see him giving chase, Pressley said that he was.

Pressley also said that his grandma, who raised him after his mother died, had instilled in him the values to help others.

Pressley and Goins said that they will remain in contact with each other following the award ceremony.

“And we’ve got a dinner date!” Goins said.

3 die in wrong-way crash on Interstate 84 in Massachusetts

In Illinois, Biden to push money for families and child care

US marshals injured in a shootout in new York, one suspect killed