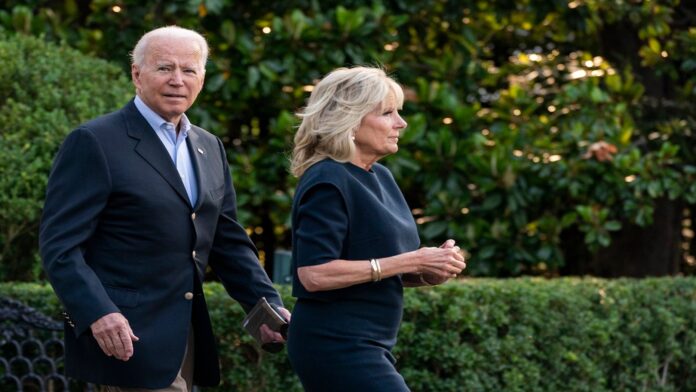 First lady Jill Biden dismissed concerns about President Biden’s mental acuity as “ridiculous,” during an interview with “CBS at Morning.”

Touching on the president’s plummeting poll numbers, CBS correspondent Rita Braver noted to the first lady: “Quite a few Americans have some questions about the president’s current mental fitness.”

A recent poll found that 46% of American voters agreed with the statement that “Joe Biden is mentally fit,” while 48% disagreed.

Braver also asked Jill Biden about the role the first lady plays as an informal adviser.

The first lady went on to say that she views her husband’s sinking poll numbers “a little differently” than others might.

“During the campaign, Joe made certain promises, things that he would do,” she said. “And we were going through a pandemic, which no one could have anticipated. So he did come in and rescue America with the American Rescue Plan. And millions of families got money because they were desperate.”

In addition to lauding the administration’s ability to secure COVID-19 vaccines for children aged five and up, Jill Biden also praised her husband’s infrastructure plan, which she said will pave the way to “better roads and better buildings that don’t have asbestos.”

Jill Biden said she believes that public opinion will “turn around” when they comprehend what the president is attempting to accomplish.

A man was shot dead in Kansas City

Two people die and two others injured in fiery crash

Partially back in New York, May 15

Eight in hospital, one killed in San Diego car crash