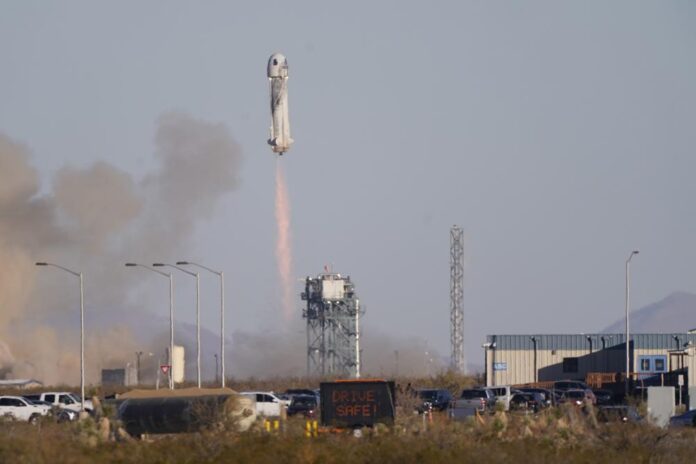 Blue Origin’s New Shepard rocket blasted off from West Texas, sending the capsule on a 10-minute flight with the two VIP guests and four paying customers. Their capsule soared to an altitude of about 66 miles (106 kilometers), providing a few minutes of weightlessness before parachuting into the desert. The booster also came back to land successfully.

It was five minutes and 50 miles (187 kilometers) shorter than Alan Shepard’s Mercury flight from Cape Canaveral on May 5, 1961. His eldest daughter, Laura Shepard Churchley, took along a tiny piece of his Freedom 7 capsule as well as mementos from his Apollo 14 moonshot and golf balls in honor of her dad who hit some on the lunar surface.

Bubbling over with excitement in his “Good Morning America” updates all week, Strahan packed his Super Bowl ring and retired New York Giants jersey No. 92. “Pretty SURREAL!” he tweeted on the eve of the launch, delayed two days by dangerously high wind. Bezos stashed a football in the capsule as well, to be awarded to the Pro Football Hall of Fame following the flight.

Bezos, who flew to space in July in the same capsule, accompanied the six passengers to the launch pad near Van Horn. He had “Light this candle” painted on the launch tower’s bridge, borrowing from Alan Shepard’s famous gripe from inside Freedom 7 as the delays mounted: “Why don’t you fix your little problem and light this candle?”

Shepard Churchley volunteered for Blue Origin’s third passenger flight. She heads the board of trustees for the Astronaut Scholarship Foundation.

“It’s kind of fun for me to say that an original Shepard will fly on the New Shepard,” she said in a preflight Blue Origin video.

Bezos, who founded Amazon six years before Blue Origin, was on the debut launch in July. The second, in October, included actor William Shatner — Captain James Kirk of TV’s original “Star Trek.” The late Leonard Nimoy’s daughter sent up a necklace with a “Vulcan Salute” charm on this flight, in honor of the show’s original Mr. Spock.

The reusable, automated capsule was especially crowded this time. Instead of four, there were six flying.

Blue Origin dedicated Saturday’s launch to Glen de Vries, who launched into space with Shatner in October, but died one month later in a plane crash.

Man shot to death outside strip club near downtown Nashville

Tracking the Suspect in the Fatal Kenosha Shootings

Counties with the most veterans in North Carolina

1 killed, 3 injured in shooting at funeral