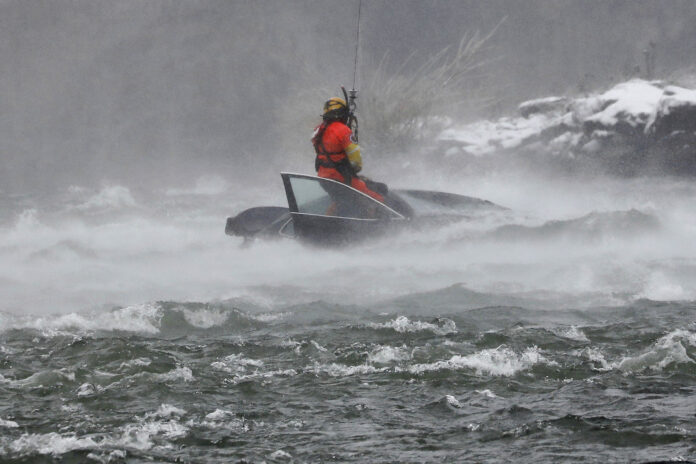 A woman whose car was in the Niagara River just yards from going over the edge was rescued by first responders but was pronounced dead once she was brought to land.

The Buffalo News reporter Stephen Watson posted footage of the terrifying scene, showing the car with its trunk open just yards away from the falls.

a Coast Guard chopper hovering over the car, as a diver lowered down and pulled the woman from her car.

The woman, who New York State Park police said was in her 60s, was the sole occupant of the vehicle.

The U.S. Coast Guard Great Lakes division said on Twitter that “Air Station Detroit helicopter crew members hoisted one female from the vehicle in the Niagara River and transferred her to local EMS. The individual was pronounced deceased on scene.

It is unknown how the car got in the river, but roads were slippery on Wednesday in Niagara Falls due to snow. Police said at a presser they used a drone to figure out if the car was occupied

Cops got witness reports that a car entered the water between the Goat Island pedestrian bridge and the vehicle bridge on the American side of the falls, according to the Buffalo News.

They told the outlet the woman, who has yet to be identified, was local to Western New York.
Park Police Captain Christopher Rola “it was just an incredible job by the Coast Guard,” who acted quickly.

After the rescue, the car remained about 50 yards from the brink of Niagara falls, the Associated Press reported. Emergency crews are currently trying to dredge it from the river.

Governor Kathy Hochul in a tweet thanked the first responders and said the New York Power Authority aided the rescue mission by lowering the levels of the Niagara River
More than six million cubic feet of water goes over the massive falls that sits on the US/Canada border every minute.