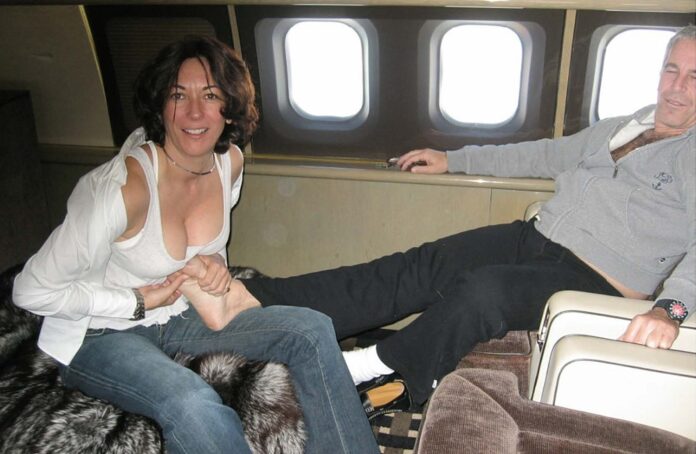 Ghislaine Maxwell was once photographed rubbing Jeffrey Epstein’s feet on what appears to be his private jet — with her breasts spilling out of her skimpy top, according to new evidence released by federal prosecutors.

The raunchy photos — entered into evidence— were recovered during an FBI raid at Epstein’s Upper East Side mansion in 2019, FBI analyst Kimberly Meder testified.

Two of the photos show Maxwell planting a kiss on Epstein’s cheek, including one that shows them in front of a beach and another on what appears to be a European street.

Other snaps show Epstein with his arm around Maxwell. One shows him holding her while he’s wearing what appears to be a red skiing outfit and another shows him with his arm wrapped around her with a phone to his ear.

The shots include three pictures of her rubbing his feet aboard what appears to be one of his private planes.

In those shots, Maxwell appears to be holding Epstein’s foot up to her breasts while her cleavage is exposed from a white tank top she wore.

Throughout the disgraced British socialite’s sex-trafficking trial, prosecutors have sought to paint Epstein and Maxwell as “partners in crime” as he sexually abused underage girls from 1994 to 2004.

In all cases, the pair used massages as a ruse to lure girls for him to sexually abuse, prosecutors charge.

Maxwell at times participated in the abuse, two victims have testified, but even when she was not present, she had a hand in the abuse, Assistant US Attorney Lara Pomerantz said in her opening statements.

“Even when she was not in the room, make no mistake, she knew exactly what Epstein was going to do to those children when she sent them to him inside the massage rooms, massage rooms inside the houses the defendant ran for over a decade,” she said.

“When the defendant sent a 14-year-old girl into a massage room with an adult man, she knew exactly what was going to happen,” she said, adding that Maxwell was “essential” to the scheme.

Maxwell is charged with grooming three underage girls for Epstein to abuse from 1994 to 2004.

A fourth accuser who was originally included as a victim in the indictment was determined to be above the age of consent when she had sexual contact with Epstein — and is no longer considered a victim of the charged conduct.

Maxwell has pleaded not guilty and maintains her innocence.

The prosecution is expected to rest its case by the end of this week, and Maxwell’s defense team has said it intends to call witnesses during its case.

Police say the discovery of three bodies in a Mesa home appears to be...

Two convicted of murder in 2018 slaying