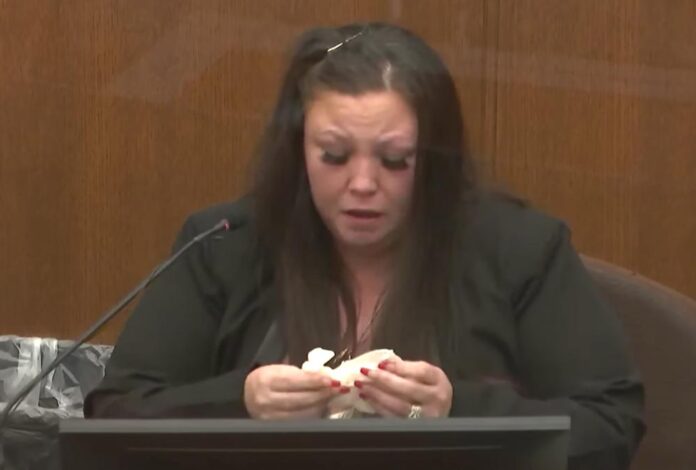 MINNEAPOLIS (AP) — A suburban Minneapolis police officer who said she mistakenly drew her gun instead of her Taser when she fatally shot Black motorist Daunte Wright went on trial on manslaughter charges, with a prosecutor saying Kim Potter had been trained how to avoid such deadly mix-ups but still got it wrong.
Potter’s lawyer, though, argued that she made an error, saying, “Police officers are human beings.” And he cast blame on Wright, saying all the 20-year-old had to do that day was surrender.
Potter, 49, killed Wright, who wasn’t armed, during a traffic stop April 11 in Brooklyn Center in a shooting that was recorded by her body camera. The white officer resigned two days later.
Jurors saw video from officers’ body cameras and the police car dashboard that showed Potter threatening to shoot Wright with a Taser as another officer tried to pull him out of his car. After she shot him with her gun, Potter can be heard saying “I just shot him. … I grabbed the wrong (expletive) gun!”
A car crash can be heard after Wright drives away and Potter — who defense attorney Paul Engh said had never fired her gun or Taser while on duty in her 26-year career — can be heard wailing uncontrollably afterward, “Oh my God. Oh my God!” before she crumples over.
Wright’s mother, Katie Bryant, testified about the moment she saw her son lying in his car after he’d been shot. She said she tried to contact him through a video call after losing an earlier phone connection, and a woman — presumably Wright’s passenger — answered and screamed, “They shot him!” and pointed the phone toward the driver’s seat.
And my son was laying there. He was unresponsive and he looked dead,” Bryant said through tears.
Video of the shooting was played repeatedly Wednesday. At one point, Potter wiped away tears, but rejected the offer of a tissue from her attorney.
A mostly white jury was seated last week in the case, which sparked angry demonstrations outside the Brooklyn Center police station last spring just as former Minneapolis Officer Derek Chauvin was on trial just 10 miles (16 kilometers) away for killing George Floyd.
Engh told jurors that Potter made a mistake when she grabbed the wrong weapon and shot Wright after he attempted to drive away while she and other officers were trying to arrest him.
The charges don’t require proof that Potter intended to kill Wright, and prosecutor Erin Eldridge noted as much for the jury.
But Engh also told jurors that Potter would have been justified in shooting Wright even if she had consciously chosen to draw her handgun, arguing that deadly force was warranted to protect her fellow officers. He said police had reason to believe that Wright might have a gun and that one of the officers had reached inside Wright’s car and was at risk of being dragged if Wright drove away.

In her opening statement, Eldridge told jurors that Potter violated her extensive training — including on the risks of firing the wrong weapon — and “betrayed a 20-year-old kid.”
“This is exactly what she had been trained for years to prevent,” Eldridge said. “But on April 11, she betrayed her badge and she failed Daunte Wright.”
Potter, who has told the court she will testify, was training a new officer when they pulled Wright over for having expired license plate tags and an air freshener hanging from the rearview mirror.
The officer Potter was training that day, Anthony Luckey, testified that during the stop, he smelled marijuana and saw marijuana residue on the car’s console. He also said Wright didn’t have a license and produced an expired proof of insurance that was under another person’s name.
After discovering there was a warrant for Wright’s arrest on a weapons charge and a restraining order against Wright, Luckey said he was going to put Wright in handcuffs and check on the welfare of the woman in the car, and he asked Wright to get out.
But as Luckey tried to handcuff him, Wright struggled out of the officer’s grip and got back into the car. Luckey said he was reaching into the car when he heard the gunshot, and that he then jumped back and saw Wright put the car in drive before it took off.
uckey testified that he thought Wright might have had a gun in the car because of the outstanding warrant and his intuition.
LEngh said the warrant for a weapons charge meant officers had to arrest Wright, and Luckey agreed.
Prosecutor Matthew Frank noted that officers do have discretion in the amount of force they can use. Luckey testified that the force he used was to try to pull Wright from the vehicle and turn off the car.
Prosecutors say Potter had extensive training, and it included an explicit warning about confusing a handgun with a Taser that also directed them “to learn the differences between their Taser and firearm to avoid such confusion.”
Eldridge told jurors that officers are required to carry their Taser on their non-dominant side and their firearm on their dominant side. Potter carried her gun on her right and her Taser on her left, where it was in a “straight draw” position to be drawn with that left hand.
“The only weapon she draws with her right hand is her gun, not her Taser,” Eldridge said.
She said Potter violated several department policies, including one that says flight from an officer is not a good cause to use a Taser.
A jury of 14 people, including two white alternates, is hearing hear the case. Nine of the 12 jurors likely to deliberate are white, one is Black and two are Asian.
The most serious charge against Potter requires prosecutors to prove recklessness, while the lesser requires them to prove culpable negligence. Minnesota’s sentencing guidelines call for a prison term of just over seven years on the first-degree manslaughter count and four years on the second-degree one. Prosecutors have said they will seek a longer sentence.
A few dozen protesters gathered outside the courthouse Wednesday evening for a short march, with several family members of Black men killed by police — including Jacob Blake’s father and George Floyd’s girlfriend, among others — calling for justice for Wright in the form of a conviction.
“If she was a woman of honor, she would have admitted her guilt and faced the consequences,” Courteney Ross, Floyd’s girlfriend, said of Potter.

Opening of I-40 bridge linking Arkansas, Tennessee moved up