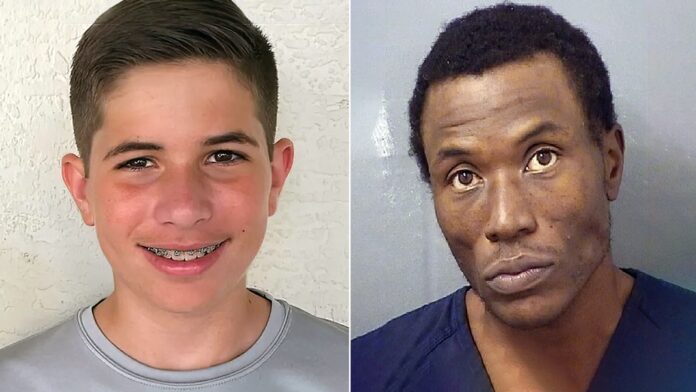 Semmie Williams Jr., the 39-year-old “homeless drifter” accused in the unprovoked stabbing death of 14-year-old Ryan Rogers of Palm Beach Gardens, has a 16-page rap sheet in Florida as well as charges in other states and a history of violence.

Palm Beach Gardens Police Chief Clinton Shannon described Williams as a “dangerous monster” and an “animal” at morning, reading off other parts of the accused killer’s rap sheet from states as far apart as Georgia and California.

Prior charges include assault, battery and domestic violence – in addition to violating an order of protection and unlawful possession of a weapon.

Now Williams is accused of stabbing Ryan to death on Nov. 15 for no discernable reason – in what Shannon called a “completely random act.”

“We do not have a motive in this case, and I would best describe it as an innocent child victim having a chance encounter with a very violent criminal,” he said.

The teen left home just after 6:30 p.m. to go for a bike ride. His parents called police to report him missing at 10:30, kicking off a two-week, around-the-clock investigation in a community where violent crime is scarce.

Williams’ Florida record includes more than 10 arrests, including domestic violence cases, simple assault and battery charges. At least two of the charges, for allegedly violating an order of protection and domestic battery, were later dropped.

His first Florida felony appears to be the murder charge in Ryan’s stabbing death.

Prior to the Palm Beach Gardens case, Williams’s most recent arrest came in 2016 in Fulton County, Georgia, Shannon said, for an aggravated assault involving strangulation. In 2014, Peach State prosecutors charged him with battering a person over the age of 65.

And court records there show he received a sentence of time served and probation for skipping court dates in both cases.

“Also in 2016, he was a fugitive from justice and arrest on a warrant in San Diego, California,” Shannon said.

State Rep. Allison Russo has won the Democratic primary for an open US House...

One killed in Hartsville shooting