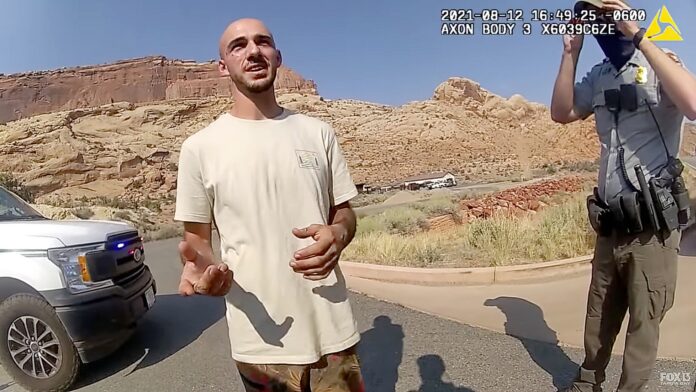 Deceased fugitive Brian Laundrie’s parents, Chris and Roberta Laundrie, were seen walking in the park where their son’s remains were recovered in October.

Chris and Roberta Laundrie spent about three hours hiking in the North Port, Florida, park where, just a month earlier, they helped law enforcement discover their son’s remains and belongings after a significant amount of water had drained in the swampy area.

“They go [there] to hike and mourn their son,” Laundrie family attorney Steven Bertolino said.

Neighbor Charlene Guthrie said that the Laundries are away from home for hours most days since media left their neighborhood after the autopsy results were revealed. A for-sale sign that was likely a hoax briefly appeared on their lawn but was taken down.

Photos also show the pair getting groceries and going about daily life after their son’s death.

The Florida District 12 Medical Examiner’s Office revealed on Nov. 23 that Laundrie, 23, took his own life with a gunshot wound to the head.

The Laundries had turned over all of the firearms in their home to the FBI – but one was missing, sources close to the investigation said

The 23-year-old fugitive was a person of interest in the disappearance and homicide of his former 22-year-old fiancée, Gabby Petito  — a tragedy that captured the nation’s attention for more than a month after Petito’s family reported her missing on September 11.

Laundrie’s parents, along with police, recovered his partial skeletal remains, along with a backpack and other personal items belonging to Laundrie, on Oct. 20 at the Myakkahatchee Creek Environmental Park, where the family frequently hiked. The following day, after a comparison of dental records, the agency confirmed the remains as Laundrie’s.

The medical examiner’s office conducted an initial autopsy in late October, but results came back inconclusive. The remains were then sent to a forensic anthropologist.

Authorities also found Laundrie’s notebook on Oct. 20, which police say “may be salvageable.” It is unclear what is inside the notebook.

Laundrie had returned to his parents’ home on September 1 without Petito. Petito’s family reported her missing 10 days later. Laundrie’s parents then reported their son missing on September 17 but clarified later that the last time they saw him was September 13.

The North Port Police Department and the FBI searched the Myakkahatchee Creek park for more than a month before eventually finding Brian’s remains and personal items with help from Laundrie’s parents in an area that had previously been underwater.

Petito-Schmidt family attorney Richard Stafford told Fox News’ Laura Ingle last week that the family “has been aware of the circumstances surrounding the suicide of the sole suspect in Gabby’s murder” and “will not be making a statement at this time due to the request of the United States Attorney’s Office and the Teton County Prosecutor’s Office.

A woman accused of beating a girl with a belt more than 10 times...

A 77-year-old man from Wisconsin, who uses a rifle, fights the bomber