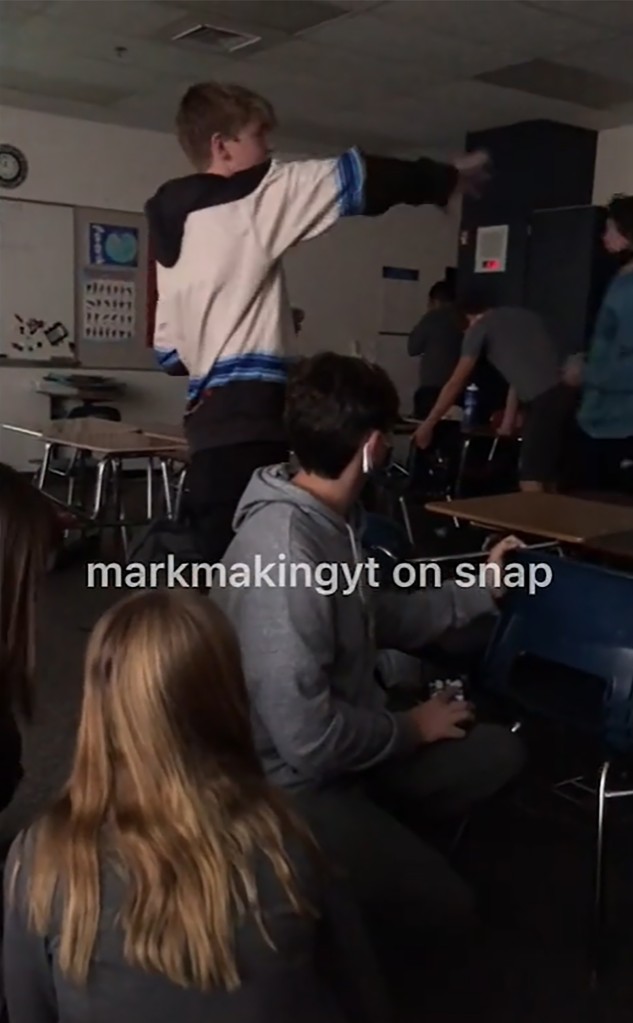 Terrified students apparently hunkered down in a classroom during deadly school shooting in Michigan — then jumped out the window amid fears the gunman was impersonating a sheriff in the hallway, according to footage shared to social media.

“Sheriff’s office. It’s safe to come out,” a male voice can be heard saying tentatively from behind the door of the Oxford High School classroom during the shooting that left three students dead and eight others wounded, the postings say.

A dozen or so frightened students seen on the clip inside the room are immediately skeptical of the supposed authority figure.

One girl is heard whispering, “We don’t know who that is.”

A student standing by the door replies sternly to the voice on the other side, “We’re not taking that risk right now.”

The male voice pleads, “OK, well, just open the door, and look at my eyes, bro.”

His casual language was enough to convince the students he could not be trusted.

The students then begin jumping out of one of the room’s first-story windows and run through the snow to a main entrance of the high school manned by a uniform officer, according to the footage.

“Slow down. You’re fine,” the officer tells the terrified teens, as the 52-second clip shared to Snapchat, Tik Tok and Twitter ends.

The alleged gunman, an unidentified 15-year-old sophomore at the school, was apprehended five minutes after a flood 911 calls were made from the school at 12:51 p.m., officials said.

“Deputies confronted him, he had the weapon on him, they took him into custody,” Oakland County Undersheriff Mike McCabe said, adding that the suspect’s motives were unknown.

A 15-year-old sophomore opened fire at his Michigan high school, killing three students and wounding eight other people, including at least one teacher, authorities said.

Oakland County Undersheriff Mike McCabe said at a news conference that investigators were still trying to determine a motive for the shooting at Oxford High School in Oxford Township, a community of about 22,000 people roughly 30 miles (48 kilometers) north of Detroit.

He said he was aware of allegations circulating on social media that there had been threats of a shooting at the roughly 1,700-student school prior to Tuesday’s attack, but he cautioned against believing that narrative until investigators can look into it.

Authorities didn’t immediately release the suspect’s name, but McCabe said deputies arrested him without incident within minutes of arriving at the school in response to a flood of 911 calls about the attack, which happened shortly before 1 p.m. He said the deputies also recovered the semi-automatic handgun and several clips the suspect used in the attack.

The three students who were killed were a 16-year-old boy and two girls, ages 14 and 17, McCabe said. Two of the wounded were undergoing surgery as of 5 p.m. and the six others who were wounded were in stable condition, he said.

McCabe said the suspect’s parents visited their son where he’s being held and advised him not to talk to investigators, as is his right. Police have to seek permission from a juvenile suspect’s parents or guardian to speak with them, he added.

McCabe said he wasn’t aware of any prior run-ins the suspect had with law enforcement or if he had any disciplinary history at school.

Gov. Gretchen Whitmer also spoke at the news conference, saying, “I think this is every parent’s worst nightmare,” while choking up.

The school was placed on lockdown after the attack, with some children sheltering in locked classrooms while officers searched the premises. They were later taken to a nearby Meijer grocery store to be picked up by their parents.

Isabel Flores, a 15-year-old ninth grader, told WJBK-TV that she and other students heard gunshots and saw another student bleeding from the face. They then ran from the area through the rear of the school, she said.

McCabe said investigators would be poring over the school’s video footage and looking through social media posts for any evidence of a possible motive.

A concerned parent, Robin Redding, said her son, Treshan Bryant, is a 12th grader at the school but stayed home on Tuesday. She said he had heard threats that there could be a shooting.

“This couldn’t be just random,” she said.

Redding didn’t provide specifics about what her son had heard, but she expressed concern with school safety in general.

“Kids just, like they’re just mad at each other at this school,” she said.

Bryant said he texted several younger cousins in the morning and they said they didn’t want to go to school, and he got a bad feeling. He asked his mom if he could do his assignments online.

Bryant said he had heard vague threats “for a long time now” about plans for a shooting at the school.

“You’re not supposed to play about that,” he said of the threats. “This is real life.”

School administrators posted two letters to parents on the school’s website this month, saying they were responding to rumors of a threat against the school following a bizarre vandalism incident.

According to a Nov. 4 letter written by Principal Steve Wolf, someone threw a deer head into a courtyard from the school’s roof, painted several windows on the roof with red acrylic paint and used the same paint on concrete near the school building.

Without specifically referencing that incident, a second post on Nov. 12 assured “there has been no threat to our building nor our students.”

“We are aware of the numerous rumors that have been circulating throughout our building this week. We understand that has created some concern for students and parents,” the administrators wrote. “Please know that we have reviewed every concern shared with us and investigated all information provided. Some rumors have evolved from an incident last week, while others do not appear to have any connection. Student interpretations of social media posts and false information have exacerbated the overall concern.”

McCabe said the incident with the deer head was “absolutely unrelated” to Tuesday’s shooting.

“That was a different incident, different student,” he said.

‘Armed career criminal’ sentenced to 15 years for drug trafficking and firearm offenses in...

California to extend eviction ban, pay back rent for tenants