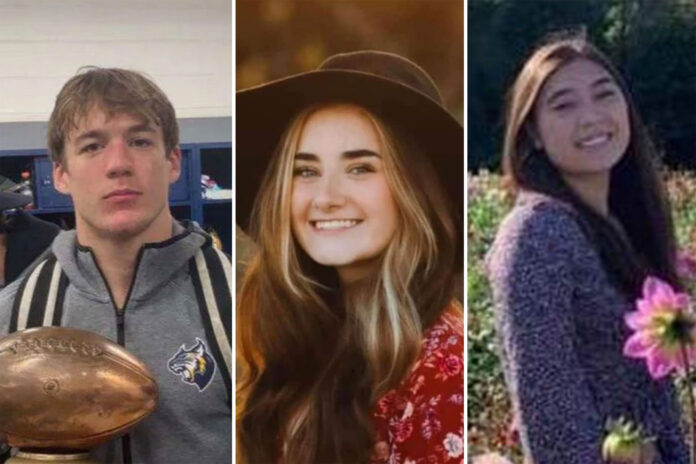 The three teens who were gunned down by a fellow student at their Michigan high school were identified — as authorities revealed the gunman’s father purchased the weapon just four days before the rampage.

Among the victims in the horrific shooting was Tate Myre, a 16-year-old “standout” football player at Oxford High School who died from his wounds on the way to the hospital in the back of a patrol car.

The two other victims were Hana St. Juliana , 14 and Madisyn Baldwin, 17, according to the Oakland County Sheriff’s Office.

“This kind of thing can happen anywhere and sadly it happened even in a sweet quiet community like Oxford,” Oakland County Sheriff Michael J Bouchard said at a press briefing.

The 15-year-old suspect, a sophomore at the school, also wounded seven other students, ranging in age from 14 to 17, and a 47-year-old teacher, authorities said.

Three of the injured students, a 15-year-old boy, and two girls, ages 14 and 17, are in critical condition.

The shooter was uninjured and taken into custody in the hallway of the school by deputies who arrived on scene within 2 to 3 minutes of the first 911 call reporting the gunfire.

Myre, a junior running back and middle linebacker on the football squad, was described by a fellow Michigan high school football player as a beloved athlete in the area.

“He was a standout player. He inspired many people and was loved by many people,” Matt Johnson, 17, told The Post.

Johnson, who attends a different high school and has played against Myre, said he was in “utter shock” when he learned of the tragedy earlier Tuesday.

Baldwin, the oldest of three siblings, was a senior who had already been accepted to several colleges, her family said

The teen suspected of carrying out the shocking attack was in police custody at a juvenile detention center and on suicide watch, authorities said.

He has retained a lawyer at the direction of his parents and refused to speak with investigators, Oakland County Sheriff Michael J Bouchard said at a Tuesday night press briefing.

Bouchard said the weapon used in the shooting was a 9mm Sig Sauer pistol that was purchased by the boy’s father on Nov. 26.

Investigators believed the shooter fired off at least 12 shots and had taken three 15-round magazines with him to school, concealing the weapon and ammunition in a bag that was later found by canine units.

A search warrant was executed at the teen’s home and authorities retrieved several items, including the boy’s phone, Bouchard said.

Deputies will present the case to the local prosecutor who will decide on the charges, according to Bouchard.

A motive in the shooting is still unclear.

Oakland County Undersheriff Michael McCabe stressed at an earlier briefing that online conspiracy theories and rumors, including claims that the attack had been planned, were unconfirmed.

Bouchard touched on the same topic at night, saying that “none” of the rumors were reported to police before today.

Oxford high, which has about 1,800 students, had been targeted in a bizarre vandalism incident a few weeks ago when someone tossed a deer head from the school’s roof and splashing red paint on some of its windows.

The school acknowledged in a later letter to parents that ensuing rumors might be a “concern’’ to them.

McCabe said the vandalism was “absolutely unrelated’’ to Tuesday’s carnage.

Terrified students apparently hunkered down in a classroom during deadly school shooting in Michigan — then jumped out the window amid fears the gunman was impersonating a sheriff in the hallway, according to footage shared to social media.

“Sheriff’s office. It’s safe to come out,” a male voice can be heard saying tentatively from behind the door of the Oxford High School classroom during the shooting that left three students dead and eight others wounded, the postings say.

A dozen or so frightened students seen on the clip inside the room are immediately skeptical of the supposed authority figure.

One girl is heard whispering, “We don’t know who that is.”

A student standing by the door replies sternly to the voice on the other side, “We’re not taking that risk right now.”

The male voice pleads, “OK, well, just open the door, and look at my eyes, bro.”

His casual language was enough to convince the students he could not be trusted.

The students then begin jumping out of one of the room’s first-story windows and run through the snow to a main entrance of the high school manned by a uniform officer, according to the footage.

“Slow down. You’re fine,” the officer tells the terrified teens, as the 52-second clip shared to Snapchat, Tik Tok and Twitter ends.

The alleged gunman, an unidentified 15-year-old sophomore at the school, was apprehended five minutes after a flood 911 calls were made from the school at 12:51 p.m., officials said.

“Deputies confronted him, he had the weapon on him, they took him into custody,” Oakland County Undersheriff Mike McCabe said, adding that the suspect’s motives were unknown.

Man struck and killed by his own vehicle in Sioux Falls

Photos: Ida leaves damage from the Gulf to the Northeast

Migrants on new route to Europe get trapped between borders