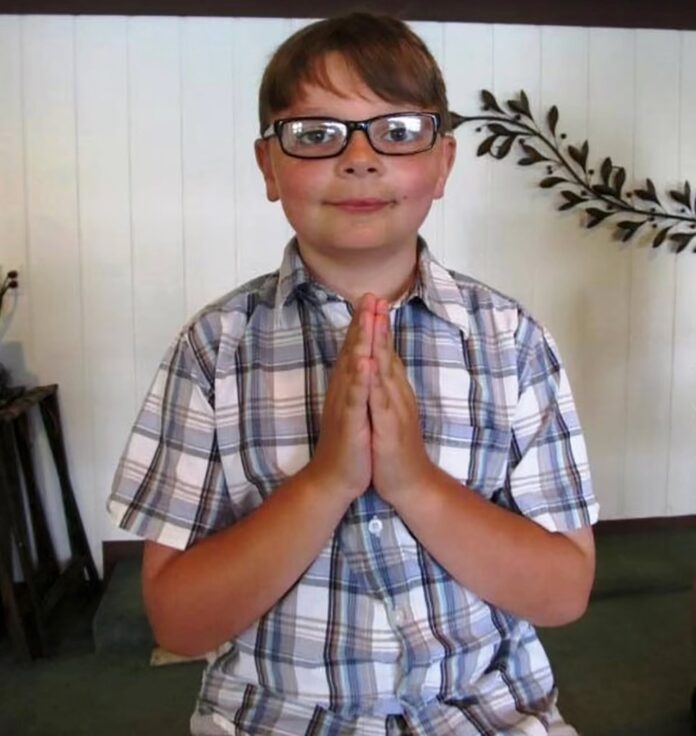 The Michigan school shooting suspect has been identified as 15-year-old sophomore Ethan Crumbley.

The teen is accused of killing four students and injuring seven others when he allegedly opened fire at Oxford High School, about 40 miles north of Detroit.

Oakland County Prosecutor Karen McDonald said that her office is considering charges against both parents.

She said Crumbley had been charged as an adult with murder, terrorism, assault and weapons possession charges.

Crumbley had posted photos of the gun, and him firing it, in the lead-up to the school shooting, the sheriff added.

Investigators said they are still trying to determine a motive for the deadly shooting because the suspect isn’t speaking to them. However, some classmates have said Crumbley was bullied.

Investigators say Crumbley’s parents, James and Jennifer, advised their son not to speak to authorities following his arrest. Police must get permission from a juvenile’s parents or guardian in order to speak with them, Undersheriff Mike McCabe said.

Police raided the family’s home, which is about two miles from the school, and seized several long guns from the house.

Meanwhile, investigators are doing a “deep dive” on Crumbley’s social media accounts to try to determine a motive or see if there were any red flags.

Crumbley was featured back in 2017 when he spoke of an elementary school group project on poverty and hunger.

“I see people on the streets sometimes that are homeless and hungry, and so I feel like I should take action and help them,” he was quoted as saying.

Authorities said late Tuesday they were made aware of social media posts saying there had been threats of a shooting at Oxford, but the sheriff said they didn’t know about the rumors until after the attack.

An Instagram account bearing Crumbley’s name, which has since been deleted, had the phrase “’Now I am become Death, the destroyer of world’. See you tomorrow, Oxford” written in the biography section.

The sheriff said Crumbley had no previous run-ins with his department and he wasn’t aware of any disciplinary history at school ahead of the shooting.

Authorities swarmed his family home hours after the shooting and were spotted hauling away evidence, including what appeared to be long guns showed.

Crumbley was taken into custody in the school hallway just minutes after deputies arrived around lunchtime.

The teen put his hands up as deputies approached him, the sheriff said, adding that his gun was found to have seven additional rounds in it.

Three of the students who were killed in the shooting were identified Tuesday by authorities as 16-year-old Tate Myre, 14-year-old Hana St. Juliana and 17-year-old Madisyn Baldwin. A fourth teen, Justin Shilling, 17, died of his wounds Wednesday.

Myre died in a patrol car as a deputy tried to get him to an emergency room, according to the sheriff.

Seven students, ranging from 14 to 17, were hospitalized with gunshot wounds, including several who were in critical condition. One 14-year-old girl was placed on a ventilator after surgery.

A teacher who received a graze wound to the shoulder left the hospital Tuesday after being treated, authorities said.

The four teenagers killed by a fellow student at Oxford High School in Michigan were being remembered for their commitment to athletics, art and family.

Here’s what we know about those killed during the shooting

Madisyn Baldwin’s grandmother said that she was a talented artist who loved to draw, read and write.

The 17-year-old was the oldest child in her family, with a half-brother and two sisters. Her grandmother said she already had received multiple college acceptances and was looking forward to the future. She described her granddaughter as patient and “so kind.”

Tate Myre, 16, was a member of the school’s varsity football team and an honor student, according to the football team’s tribute to him on Twitter.

“Tate was a great young man with a bright future and beloved by all,” the post read. “You will be missed, Tate.”

Myre frequently shared video highlights of his play during football games and recently retweeted a media interview following a playoff game win on a rainy evening. Reflecting on an 0-3 start to the season, he said the team worked hard and had to trust and love one another to recover.

“Rain is just like Oxford football, tough, muddy,” he said, wearing the number 42 on his white jersey. “Everything about us is tough.”

Brett Moore, 46, said his son, a sophomore at Oxford High School who played football with Myre, is taking his friend’s death “very badly.”

“Tate drove him home from practice every day and they went to homecoming together,” said Moore, who teaches in Walled Lake schools. “He was a great kid.”

Hana St. Juliana also was remembered for her passion and commitment to athletics.

“We will never forget your kind heart, silly personality, and passion for the game,” the team’s post said. “Since 6th grade camp you have stayed dedicated to Oxford Basketball, soaking in the game. … This season we play for you Hana.”

Authorities on Wednesday announced that a fourth student died of his injuries that morning. They identified him as 17-year-old Justin Shilling.

Managers of a restaurant in nearby Lake Orion, Anita’s Kitchen, said Shilling worked there — one of many employees who attended Oxford High School since they opened.

“Justin was an exemplary employee, a devoted friend and co-worker, co-captain of his bowling team, and simply a pleasure to be around,” a message on the restaurant’s Facebook page said. Another six unidentified students and a teacher were wounded.

Here are their ages and conditions, according to the Oakland County Sheriff’s Department:

The Latest: Taliban fire weapons into air, at least 2 killed