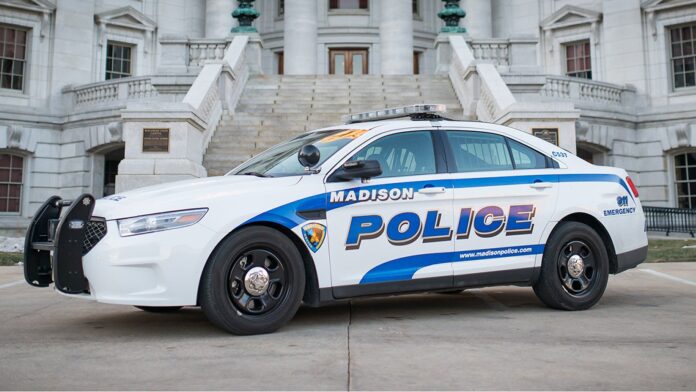 A Wisconsin police officer resigned after a recording surfaced that showed him engaging in sexual activity with a woman in his department vehicle.

Patterson resigned after the department decided “a separation from service” was the most appropriate response.

“The recent actions of Lt. Patterson do not align with the mission of the Madison Police Department,” the department said in a statement.

The department placed Patterson on administrative leave for two months and did not name the officer involved in the incident, but local media confirmed and named Patterson.

The department had prepared to fire Patterson, a 15-year veteran of the department. Patterson apologized for the incident when he resigned.

Marcel Scott, a bystander, recorded the incident in the parking lot of a Farm and Fleet, the Wisconsin State Journal reported. Video of the officer and the woman circulated on social media and Patterson was placed on administrative leave.

The woman involved was not a prostitute, the sheriff’s office confirmed.

A Wisconsin police lieutenant has resigned after being recorded engaging in sexual activity with a woman in a police car that belonged to the Madison Police Department.

The department announced the resignation of Lt. Reginald Patterson as it concluded an investigation into the incident, the Wisconsin State Journal reported. A bystander in September had caught Patterson on camera with the woman in the back of a squad car that was parked outside of a Madison Farm and Fleet store.

The department moved to dismiss Patterson after finding he had violated multiple department policies.

“The recent actions of Lt. Patterson do not align with the mission of the Madison Police Department,” the department said in a statement.

Video of the squad car incident circulated on social media and Patterson was placed on administrative leave.

The Dane County Sheriff’s Office, which investigated the incident, referred no criminal charges, according to the statement.

Motorcyclist dies in crash during police chase in Wichita

The bus is sinking significantly from the bridge in NY; The driver and passengers...

A one-year-old baby dies of fentanyl poisoning in Baltimore

A driver killed in a two car crash in a phoenix