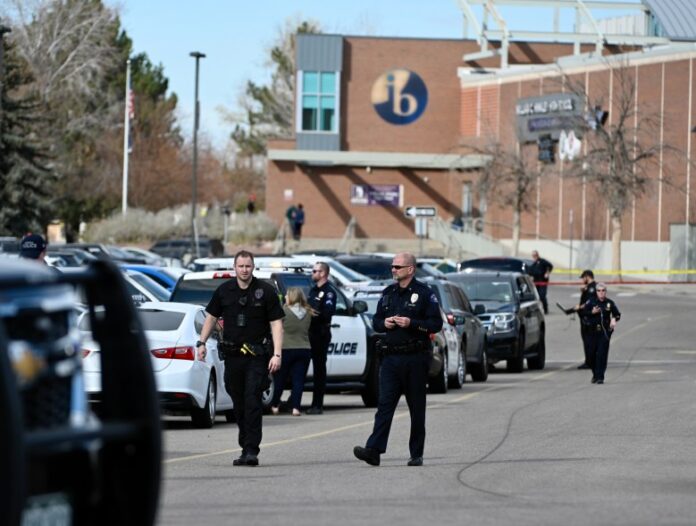 Three people were shot in the parking lot of Hinkley High School in Aurora, police said.

Two victims were taken to a local hospital, Aurora police said, while a third person self-transported to the hospital.

The shooting comes just days after six teens were injured in a drive-by shooting at a park across the street from a different Aurora high school.

Hinkley High School, at 1250 Chambers Road, is on lockdown, and the school will begin a phased release for students at 2 p.m. from the building’s north doors, an Aurora Public Schools spokesman said in an email.

All after-school activities and athletics have been canceled, Hinkley High School officials tweeted.

Gael Dominguez, a Hinkley junior, said he saw people running and “at first I thought they were fooling around.” Teachers started yelling at students to run, so Dominguez fled the campus and called his mom to tell her he was OK.

Church volunteers passed out bottles of water to concerned parents outside the school at afternoon, who gathered behind the yellow crime tape surrounding the campus.

Sherri Ellis rushed to the school to pick up her grandson.

“I can only imagine how these kids feel going to school,” she said. “This is crazy. When is it going to stop?”

Jeremy Conrad, who works at the nearby Calvary Wellspring Church, said he doesn’t have any children at the school, but came out because he was concerned for the community.

In the wake of that shooting, city and interfaith leaders planned a peace march Friday — but just as they were about to get underway, word of the Hinkley shooting made its way to organizers.

The organizers let the city know that they were postponing the event, Aurora officials tweeted.

Gov. Jared Polis offered “thoughts and prayers” to the victims during a news conference on Colorado’s COVID-19 situation on Friday, and said the state is working on initiatives to reduce violence in communities.

“We as a state need to redouble our efforts to reduce youth violence,” he said.