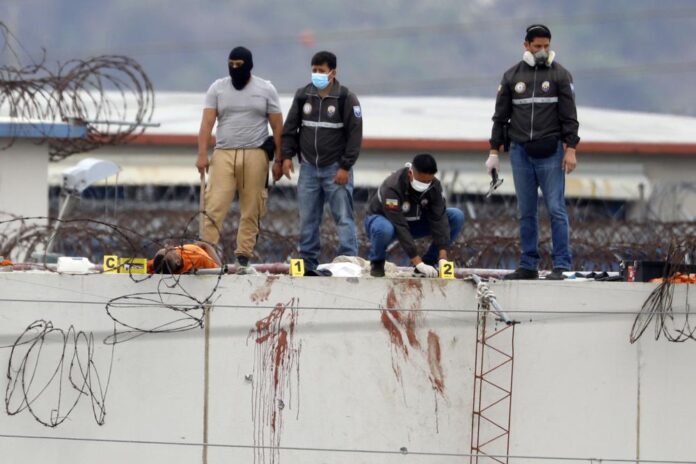 QUITO, Ecuador (AP) — Clashes inside Ecuador’s largest prison left at least 52 inmates dead in the latest violence to hit the Litoral Penitentiary, which recently saw what authorities said was the country’s worst ever prison bloodbath.

Residents living near the prison in the coastal city of Guayaquil reported hearing hours of sustained gunfire and explosions coming from inside the lockup. A police report seen by The Associated Press said 10 inmates were also injured and explosives and guns seized.

Videos circulating on social media purporting to be from inside the prison showed bodies, some burned, lying on the ground.

The prison violence comes amid a national state of emergency decreed by President Guillermo Lasso in October that empowers security forces to fight drug trafficking and other crimes.

Ecuador’s penitentiaries are seeing a wave of brutal violence authorities attribute to prison gangs linked to international drug cartels fighting for control. In late September, a battle among gang members in Litoral prison killed at least 118 people and injured 79 in what authorities described as the South American country’s worst prison massacre. Officials said at least five of the dead were found to have been beheaded.

Outside the Litoral prison on Saturday, relatives of inmates gathered for news of their loved ones.

“Enough of this. When will they stop the killing? This is a prison not a slaughterhouse, they are human beings,” said Francisca Chancay, 55, whose brother has been in the prison for eight months.

Some were calling for Ecuador’s security forces to take control of the prisons.

“What is (President Guillermo) Lasso waiting for? That there are more deaths?″ said Maritza Vera, 62, whose son is an inmate. ”Have mercy, where are the human rights. We thought this was going to change, but it’s worse.”

Ecuador has 40,000 inmates in its penitentiary system, of which about 8,500 are in Litoral. According to prison services’ data, facilities are overcrowded by 55% at the national level and 62% in the Litoral facility.

Overall, Ecuador’s prisons had seen 230 deaths so far this year before Saturday’s massacre

Akron police say alcohol is believed to be a factor in the crash of...