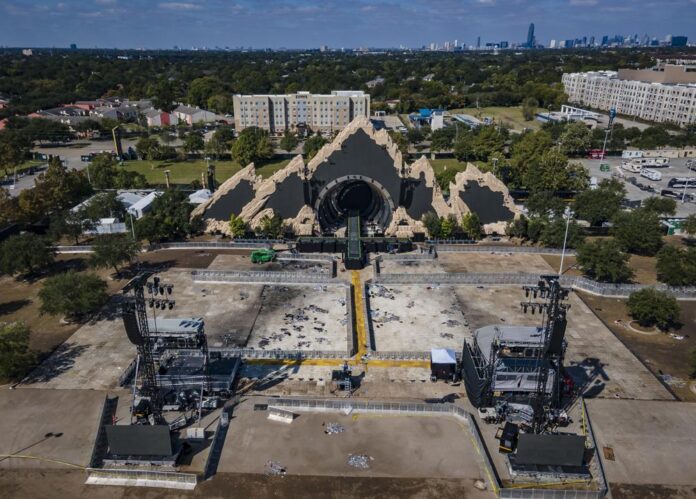 HOUSTON (AP) — A 56-page event operations plan for the Astroworld music festival included protocols for dangerous scenarios including an active shooter, bomb or terrorist threats, and severe weather, but it did not include information on what to do in the event of a crowd surge.

But that’s what authorities believe happened at night when eight people died after headliner Travis Scott took the stage at the outdoor festival in Houston that is now the focus of a criminal investigation. Authorities have said 50,000 people attended the event.

“In any situation where large groups of people are gathering, there is the potential for a civil disturbance/riot that can present a grave risk to the safety and security of employees and guests,” the plan said. “The key in properly dealing with this type of scenario is proper management of the crowd from the minute the doors open. Crowd management techniques will be employed to identify potentially dangerous crowd behavior in its early stages in an effort to prevent a civil disturbance/riot.”

If crowds are displaying threatening or destructive behavior, security and a supervisor should be notified, the plan said.

Experts say crowd surge deaths happen because people are packed into a space so tightly that they are being squeezed and can’t get oxygen. It’s not usually because they’re being trampled.

None of the people listed in charge of managing Astroworld’s security and operations have responded to requests for comment.

Houston’s police chief said that he met with Scott to discuss safety concerns before the rapper performed on Friday. Houston Police Chief Troy Finner said Scott’s head of a security also attended that meeting, but he did not provide details of their conversation in a statement released by the police department.

“I asked Travis Scott and his team to work with HPD for all events over the weekend and to be mindful of his team’s social media messaging on any scheduled events,” Finner said. “The meeting was brief and respectful, and a chance for me to share my public safety concerns as Chief of Police.”

Houston police and fire department investigators have said they are reviewing surveillance video provided by concert promoter Live Nation, as well as dozens of clips from people at the show that were widely shared on social media. Investigators also planned to speak with Live Nation representatives, Scott and concertgoers.

Live Nation said in a statement that full refunds would be offered to all attendees.

Scott’s scheduled appearance at the Day N Vegas Festival in Las Vegas this weekend was canceled, according to a Scott representative who requested anonymity because they were not authorized to speak publicly about the matter.

Scott, who founded the Astroworld festival, said he would cover funeral costs for the victims. The dead ranged in age from 14 to 27 and came from Texas, Illinois and Washington state, according to Harris County authorities. They included high schoolers, an aspiring Border Patrol agent and a computer science student.

Medical examiners have not released the causes of death, which could take several weeks, said Michele Arnold, a spokeswoman for the Harris County Institute of Forensic Sciences.

Over 300 people were treated at a field hospital on site and at least 13 people were hospitalized.

Investigators were also interviewing witnesses and planned to examine the design of safety barriers and the use of crowd control at the event.

Contemporary Services Corp., headquartered in Los Angeles, was responsible for security staff at the festival, according to county records in Texas. The company describes itself online as being “recognized worldwide as the pioneer, expert and only employee owned company in the crowd management field.” Company representatives have not responded to emails and phone messages seeking comment.

Astroworld’s security and emergency medical response protocols filed with Harris County and obtained by the AP states “the potential for multiple alcohol/drug related incidents, possible evacuation needs, and the ever-present threat of a mass casualty situation are identified as key concerns.”

The plan instructs staff to “notify Event Control of a suspected deceased victim utilizing the code ‘Smurf’.” It goes on to say, “never use the term ‘dead’ or ‘deceased’ over the radio.” It’s not clear whether the protocol was followed.

There is a long history of similar catastrophes at concerts, as well as sporting and religious events. In 1979, 11 people were killed as thousands of fans tried to get into Cincinnati’s Riverfront Coliseum to see a concert by The Who. Other crowd catastrophes include the deaths of 97 people at a soccer match in Hillsborough Stadium in 1989 in Sheffield, England, and numerous disasters connected with the annual hajj pilgrimage in Saudi Arabia.

Temperatures and humidity on the rise

Many in Missouri still waiting for school lunch reimbursements