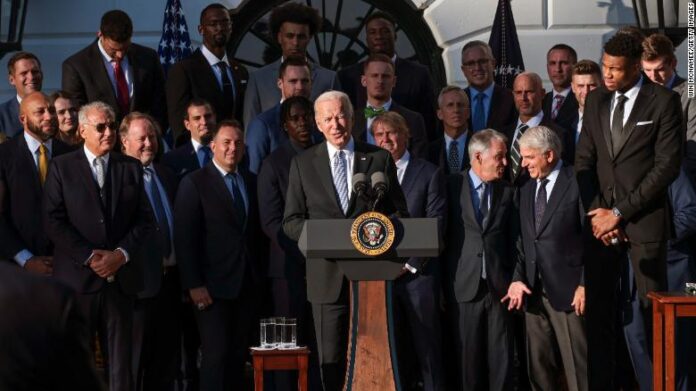 President Joe Biden honored the NBA champion Milwaukee Bucks at a White House ceremony on Monday, marking the first visit to 1600 Pennsylvania Avenue by an NBA championship-winning team since 2016.

Harkening back to the first NBA team visit to the White House, made by the Boston Celtics during the Kennedy administration, the President said during the outdoor ceremony that he was “honored to welcome the Milwaukee Bucks to continue that tradition in sport and democracy. Unity, perhaps, is the most elusive thing and the most necessary thing. But that’s who this team is — they’re unified. That’s who we are as a nation.”

“Through it all, one thing remains constant — the values of the game and of the sport: teamwork, hard work and respect. And the belief that we can strengthen the bonds that bring us together and stand for something bigger than ourselves,” he added.

The President also thanked the team for engaging their fans and for taking a stand following the police shooting of Jacob Blake by boycotting a playoff game in 2020.

“Last year, as a team, you took a stand for justice and peace in the wake of Jacob Blake’s shooting in Kenosha, Wisconsin. And you’ve gotten people engaged,” Biden said, adding, “It really mattered. I remember calling your coach. You got people engaged in the vote, in the political process. You encouraged fans to get vaccinated. I just want to thank you.”

The Bucks’ win marked their first championship since 1971.

They are the first NBA champs to make the traditional visit to the White House since the Cleveland Cavaliers did so in November 2016. In 2017 and 2018, the Golden State Warriors did not visit the White House.

In 2017, point guard Steph Curry said he didn’t want to visit to celebrate the win because he and his team “don’t stand for” the things then-President Donald Trump said following fatal demonstrations by White supremacists in Charlottesville, Virginia.

“By acting and not going, hopefully that will inspire some change when it comes to what we tolerate in this country and what is accepted and what we turn a blind eye to,” Curry said at the time.

After their second win in 2018, the team decided to tour the National Museum of African American History and Culture in Washington with a group of school children instead of visiting the White House.

The Toronto Raptors declined to visit the White House in 2019 after their win, with then-Raptors player Danny Green saying a visit was “a hard no” because Trump “makes it very, very tough to respect how he goes about things and does things.”

The Los Angeles Lakers, the 2020 champs, did not visit the White House to celebrate their win because of Covid-19 protocols and scheduling issues.

Ahead the of the ceremony, a group of Bucks players toured the White House and posed for pictures on the South Lawn.

The United States records more than 1500 new deaths due Corona

Victorian man charged with murder after highway shooting near Geelong

The officers killed the man who stabbed the policeman’s jacket, and slammed a knife...