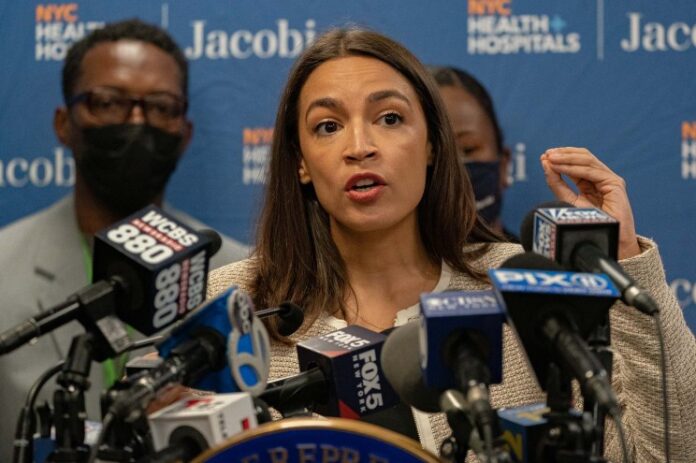 Voters in New York City didn’t hold back their criticism of far-left U.S. Rep. Alexandria Ocasio-Cortez this weekend after she joined five other progressive Dems in opposing the bipartisan $1.2 trillion infrastructure bill that the House approved.

“I don’t know why she voted against it,” Michael Goodman, a retired college professor, told the New York Post. “For decades, New York has given more money than they’ve gotten back. Politics is the art of compromise. A bird in the hand is worth two in the bush.”

“New York needs this money,” Sidibe Ibrahima, another city resident who said she was a Democrat, told the newspaper. “The fact that [AOC] had her own community impacted by the floods, how are you going to go against an infrastructure bill? She should think about the people who voted for her.”

Ibrahima was referring to the impact of Hurricane Ida last September on much of the Northeast, including Ocasio-Cortez’s congressional district, which includes parts of the Bronx and Queens boroughs of New York City. The bill, which passed on a 228-206 vote– with 13 Republicans supporting the measure – includes funding for sewer and drainage upgrades to help prevent flooding.

Ocasio-Cortez, 32, now in her second term in Congress, explained her vote in an Instagram Live video, according to the newspaper. She claimed that passage of the infrastructural bill imperils passage of the more costly Build Back Better safety-net legislation that she and other progressives support.

Also criticizing Ocasio-Cortez’s “no” vote was U.S. Rep. Nicole Malliotakis, the Staten Island and Brooklyn congresswoman who was among the 13 Republicans to buck the GOP and support the Democrats’ legislation.

“I think she did her district a disservice,” Malliotakis told the Post. “New York City benefits more than any other part of the country. It’s all hard infrastructure and all things that we desperately need.”

The Post noted that in addition to Malliotakis, three other GOP lawmakers from New York state also were in the group of 13 Republican defectors: U.S. Reps. John Katko, Tom Reed and Andrew Garbarino.

Largely blue New York state stands to reap as much as $170 billion from the infrastructure bill, the Post reported.

Ocasio-Cortez previously faced criticism in her home city during her first term, when she opposed an Amazon deal that could have brought 25,000 jobs to New York City, describing the deal’s tax incentives as a “corporate giveaway.”

Months later, after Amazon agreed to bring just 1,500 jobs to the city, Ocasio-Cortez was slammed on Twitter for suggesting the Jeff Bezos-led company was agreeing to a deal anyway – without “handouts.” Critics reminded her that the scaled-down deal meant far fewer jobs for city residents.

“Another day, another viral misleading tweet from AOC,” one Twitter user wrote about an Ocasio-Cortez post in which she claimed she was “waiting on haters” after being “proven right.”

Beaches and night life in Ibiza

Weekend of fear looms for Californians in face of wildfires