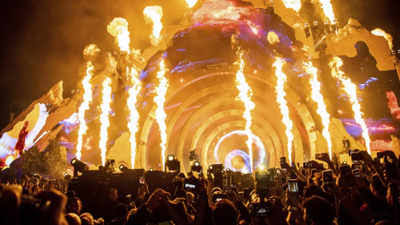 At least eight people are dead after a panic during the sold-out Astroworld music festival in Houston, the fire chief said.
Seventeen people were transported to the hospita

l after the crush, and 11 who were taken by ambulance were in cardiac arrest, Houston officials said. In all, more than 300 people were treated Friday at an on-site field hospital.

Around 9:15 p.m. “the crowd began to compress toward the front of the stage,” Fire Chief Samuel Peña said at a news conference
That caused some panic, and it started causing some injuries, people began to fall out, become unconscious, and it created additional panic,” the fire chief said.

Houston police Executive Assistant Chief Lt. Larry Satterwhite, who was near the front, said the situation developed quickly.
“It seems like it happened with just over the course of a few minutes —suddenly we had several people down on the ground experiencing some type of cardiac arrest or some type of medical episode,” he said. “We immediately started doing CPR.”

About 50,000 people were at the event at NRG Park, which was being put on by rapper and producer Travis Scott and kicked off Friday. The festival, which is in its third year, was expected to be a two-day event, but officials said that Saturday’s lineup had been canceled.
Earlier in the day, multiple people were injured as festivalgoers rushed a front entrance, NBC affiliate KPRC of Houston reported.
“Our hearts are broken,” Harris County Judge Lina Hidalgo said. “People go to these events looking for a good time, a chance to unwind, a chance to make memories.”
A reunification center was established for anyone who has friends or relatives who were at the concert and who have not heard from them, officials said.

Few details were available about those who were killed and injured, but those transported to hospitals included some as young as 10 years old, Hidalgo, the county judge, said.
Investigators were being sent to hospitals, police said.
Houston Police Chief Troy Finner urged people not to speculate about what occurred but said the incident was under investigation, adding said that Scott and other event organizers have been cooperative.
“We just don’t know. But we will find out,” he said. “Pray for these families.
Scott, 29, is from Houston. He launched the Astroworld Festival in 2018 in his hometown as an annual event. The festival did not happen in 2020 because of the Covid-19 pandemic.
His 2018 hit “Sicko Mode” reached No. 1 on Billboard’s Hot 100 that year. He has been nominated for nine Grammy awards, including for that song and the album “Astroworld

Car collides with parked tractor-trailer on shoulder of I-40 in Burke County, driver killed