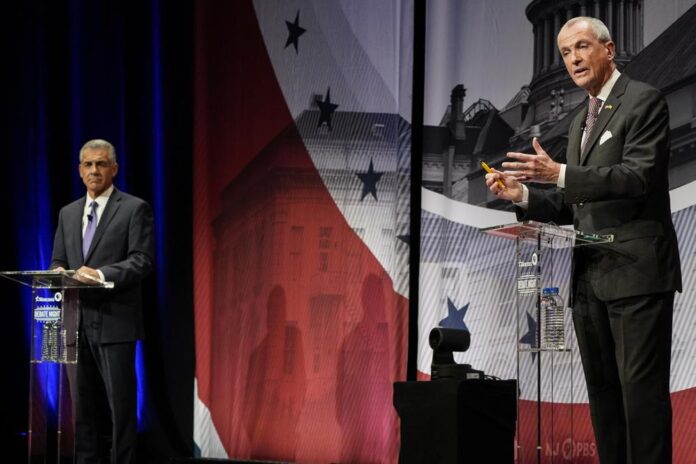 TRENTON, N.J. (AP) — New Jersey voters have already begun casting mail-in ballots and on Saturday began heading to the polls for early in-person voting for the first time ever.

The governor’s race is at the top of the ballot, with Democratic Gov. Phil Murphy seeking reelection against Republican Jack Ciattarelli, a former Assembly member.

Third-party candidates are also on the ballot. They are Madelyn Hoffman of the Green Party, Joanne Kuniansky of the Socialist Workers Party, and Gregg Mele of the Libertarian Party.

Public polling in the race has shown Murphy with a lead over Ciattarelli. While the gap has narrowed, Murphy also has other advantages, including 1 million more registered New Jersey Democrats than Republicans and more cash on hand than Ciattarelli, according to state data.

A closer look at where the two major party candidates stand on a few big issues:

Murphy has led the state through the outbreak that saw New Jersey as an early hotspot but also one of the first state’s to reach 70% of the adult population to be fully vaccinated. About 25,000 people have died from the virus since 2020, with 35% coming from nursing and veterans homes, according to state figures.

Murphy closed many sectors of the state during the pandemic, including restaurants, theaters, gyms and nonessential retail, while also requiring face coverings. He then loosened restrictions as trends headed in the right direction and curtailed them more as vaccinations increased.

He’s instituted mandates in health care and education, among others, for workers to be vaccinated or to undergo regular testing. Murphy promised a review of his administration’s handling of the outbreak but he said it will not be done in time for the election because the pandemic is still unfolding.

Ciattarelli has said he supports vaccination but thinks masking in schools, for example, should be optional. He also agreed with Murphy’s policy of giving educators the choice to get vaccinated or be tested regularly.

The Republican slammed Murphy’s policy early on in the pandemic of allowing nursing home residents to return to facilities from hospitals regardless of COVID-19 status, faulting Murphy for a spike in deaths among residents. The governor has responded that his policy required them to be segregated from the uninfected and that the facilities were the patients’ homes.

New Jersey’s average property tax bill is about $9,100. That’s the highest in the country, according to the nonprofit Tax Foundation, making these taxes a constant issue in the state.

Because property taxes finance local governments as well as school districts, Murphy has argued that his increase of state education aid has decreased pressure to raise taxes. Indeed, Murphy has increased aid to schools through the state’s funding formula, which has been approved by the state Supreme Court.

Under Murphy, that aid climbed to nearly $9 billion, up about $1 billion since Republican Chris Christie left office. Property tax increases have slowed over that time, though that’s in part due to a 2% property tax cap instituted under Christie. Murphy says he will continue to fund the formula to take pressure off property taxes.

Ciattarelli wants to freeze property taxes for those over 65 as well as scrap the current school-funding formula to make it “fairer.” He points to high-price homes in Jersey City and Hoboken that have lower rates than $400,000 residences in Toms River and Hillsborough, for example. But it’s not clear what his plan would look like or whether it would pass muster with the state Supreme Court, though Ciattarelli says his plan would.

Murphy, an abortion rights supporter, said he wants to sign the Reproductive Freedom Act into law if reelected. The bill would codify a woman’s right to an abortion into state law, a move that’s aimed at maintaining that ability if the U.S. Supreme Court strikes down the landmark Roe v. Wade decision.

Ciattarelli also supports the Roe v. Wade decision and a woman’s right to choose an abortion, but he says the RFA goes too far by authorizing late-term abortions. He has said if the Supreme Court undoes Roe v. Wade, New Jersey would have to add the right to an abortion into state law, but he does not believe the high court would overturn the precedent decided by the court in 1973.

Murphy’s budgets have grown each year while in office, culminating in a spending plan of more than $46 billion, 15% higher than the previous year. He’s financed the increases in part with tax hikes under his watch, including higher rates on businesses and individuals earning more than $1 million. He’s instituted a host of new programs that languished in the Democrat-led Legislature under his predecessor, Christie. Those include some state-funded pre-K and community college, both of which he wants to expand if reelected.

Ciattarelli laments the growth of the budget and says it needs to be cut. Asked what he would slash, he said he’d sit down with the Legislature on “Day One” to hash that out.

One dead in the Milford accident. East Broadway is closed

A 10-year-old boy was killed and a baby was wounded in a shooting in...