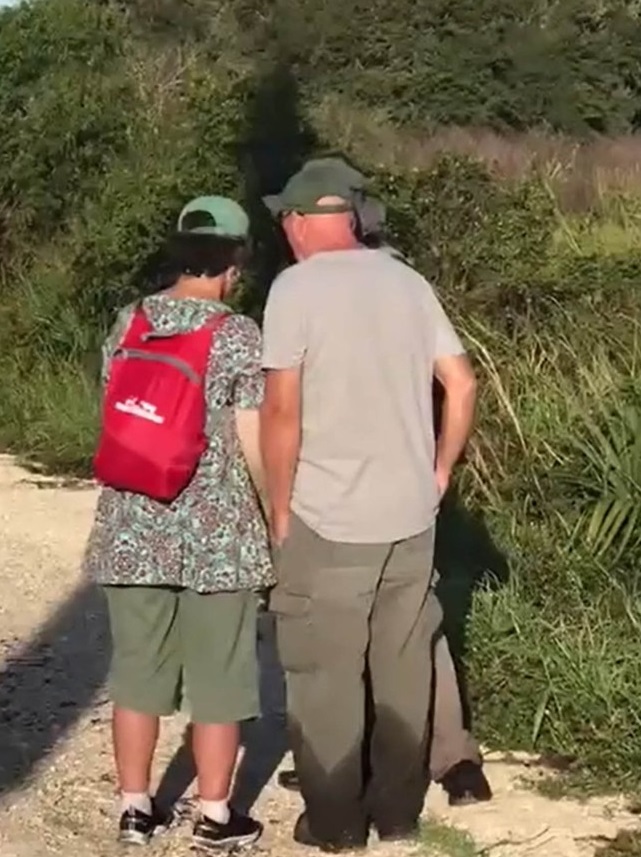 (AP) ST. PETERSBURG, Fla. — Items believed to belong to Brian Laundrie were found in a Florida wilderness park as the search continued for clues in the slaying of Gabby Petito, a Laundrie family attorney said.

Laundrie’s parents, Chris and Roberta Laundrie, took part in the search Wednesday with the FBI and police from North Port, Florida, more than a month after Laundrie was reported missing.

“After a brief search off a trail that Brian frequented some articles belonging to Brian were found,” attorney Steven Bertolino said in a text to The Associated Press. “As of now law enforcement is conducting a more thorough investigation of that area.”

No other details were immediately available. The Sarasota County Medical Examiner’s Office confirmed they had been summoned to the reserve but would not comment further.

Laundrie, 23, is a person of interest in the killing of Petito, who was reported missing Sept. 11 by her parents while the couple was on a cross-country trip out West.

Petito’s body was found Sept. 19 on the edge of Wyoming’s Grand Teton National Park, which the couple had visited. The coroner there concluded she died of strangulation and her body had been where it was found for three or four weeks.

The couple was stopped Aug. 12 by police in Moab, Utah, after they had a physical altercation, but no charges were filed.

Laundrie returned home alone Sept. 1 in the Ford van the couple took on their trip. He was reported missing after telling his parents on Sept. 14 that he was going for a hike in the Carlton Reserve, a vast nature preserve in Sarasota County that has for weeks been a key area in the search.

The activity Wednesday was focused on the nearby Myakkahatchee Creek Environmental Park, where television news reports showed numerous law enforcement vehicles arriving and a tent set up inside the woods. The location is where a Ford Mustang that Laundrie drove to the wilderness was found.

Laundrie is charged in a federal Wyoming indictment with unauthorized use of a debit card, which would allow authorities to arrest him if he is found alive.

It alleges Laundrie used a Capital One Bank card and someone’s personal identification number to make unauthorized withdrawals or charges worth more than $1,000. It does not say to whom the card belonged or what type of charges were made.

The case generated enormous public interest but also raised uncomfortable questions over the unequal attention given to the hundreds of cases of Native American and other minority women missing or murdered across the United States. Petito is white.

Some articles belonging to Brian Laundrie were discovered at a Florida nature park where authorities have searched for the fugitive – and the Sarasota County Medical Examiner’s Office has reportedly been called.

“Chris and Roberta went to the Myakkahatchee Creek Environmental Park this morning to search for Brian,” he said in an email. “The FBI and (North Port Police Department) were informed last night of Brian’s parents’ intentions and they met Chris and Roberta there this morning.

“After a brief search off a trail that Brian frequented some articles belonging to Brian were found. As of now law enforcement is conducting a more thorough search of that area,” Bertolino added.

the Medical Examiner’s Office has been summoned to the site.

The find was made after the heavily wooded reserve — which had been closed to the public late last month for the FBI-led search — reopened, the city announced on Twitter on Tuesday.

The neighboring 25,000-acre Carlton Reserve, where authorities have also been searching for the fugitive, was listed by Sarasota County as also being open.

Before Gabby Petito disappeared while on a cross-country van trip with her fiancé, her conversations with her mother appeared to reveal Petito had “more and more tension” with her travel partner, a police affidavit for a search warrant indicates.

The affidavit, filed by Florida police last week, offers new insight into what investigators have gleaned as they try to determine not only what happened to Petito but also the current whereabouts of the fiancé who returned to Florida this month without her.

Brian Laundrie, Gabby Petito’s fiancé, has been missing for a week. Here’s why it’s been so hard to find him

Human remains that officials said are consistent with Petito’s description were found Sunday in an undeveloped camping area in Wyoming’s Bridger-Teton National Forest on the eastern edge of Grand Teton National Park.

An autopsy was underway Tuesday morning, and the FBI is expected to release the results later in the day, Teton County Coroner Dr. Brent Blue said

And a police search for the fiancé, Brian Laundrie, resumed Tuesday at a Florida nature reserve where his parents reportedly said he indicated he was going last week.

Petito, 22, and Laundrie, 23, had been road-tripping in a white van from New York through the US West over the summer, regularly posting photos and stories to their social media pages with the hashtag #vanlife.

Those posts abruptly stopped in late August, and Laundrie returned to his North Port, Florida, home on September 1 in their van without Petito, whose family reported her missing September 11. Authorities are looking for Laundrie, whose parents told investigators he left home with a backpack September 14, and have searched his home, including.

The case has become an obsession for many, spurring digital detectives to comb through the couple’s online trail. The story has also further highlighted the tens of thousands of unsolved missing persons stories.

Before she vanished, Petito sent multiple text messages and had many talks with her mother via cell phone during her trip, Florida police wrote in an application filed last week for a search warrant for an external hard drive found in the couple’s van.

In those conversations, there “appeared to be more and more tension between her and Laundrie,” the affidavit reads. On August 27, Petito’s mother received one last communication from her daughter, which she called an “odd text,” the affidavit says.

The message read: “Can you help Stan, I just keep getting his voicemails and missed calls.” Because the text message referred to Petito’s grandfather as Stan, her mother was concerned that something was wrong, the warrant states.

Following that text message, Petito’s phone was no longer operational and she stopped posting anything on social media about their trip, the warrant says.

One more text came on August 30 that read, “No service in Yosemite,” but her family doubts she wrote it, Richard Stafford, an attorney representing Joseph Petito and her mother, Nicole Schmidt said.

Other evidence of tension between Petito and Laundrie also has emerged. A 911 audio recording in Utah sheds new light on a now-well-publicized incident in which police confronted the pair on August 12.

In the 911 recording from the Grand County Sheriff’s Office in Moab, Utah, a caller reports what he called a “domestic dispute” between a couple.

Bodycam footage from the Moab Police Department shows them talking with Brian Laundrie.

Bodycam footage from the Moab Police Department shows them talking with Brian Laundrie.

“We drove by and the gentleman was slapping the girl,” the caller says. “Then we stopped. They ran up and down the sidewalk. He proceeded to hit her, hopped in the car, and they drove off.”

Although the Petito and Laundrie are described in a police report as getting into a physical fight following an argument, “both the male and female reported they are in love and engaged to be married and desperately didn’t wish to see anyone charged with a crime,” Officer Eric Pratt wrote in the report.

At the suggestion by police, the couple separated for the night, the report said, which described Petito as “confused and emotional.”

A National Park Service ranger who also responded to the call interacted with Petito for about 90 minutes, and warned her that her relationship with Laundrie had markings of a “toxic” one, the ranger told the Deseret News of Utah.

“I was imploring with her to reevaluate the relationship, asking her if she was happy in the relationship with him, and basically saying this was an opportunity for her to find another path, to make a change in her life,” ranger Melissa Hulls said