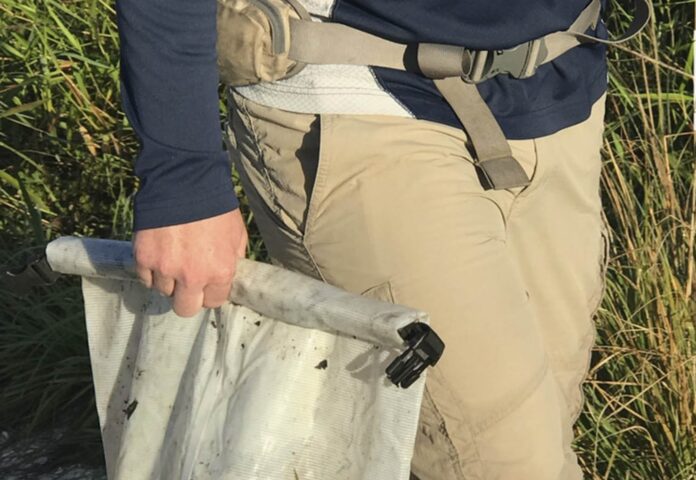 Some articles belonging to Brian Laundrie were discovered at a Florida nature park where authorities have searched for the fugitive – and the Sarasota County Medical Examiner’s Office has reportedly been called.

“Chris and Roberta went to the Myakkahatchee Creek Environmental Park this morning to search for Brian,” he said in an email. “The FBI and (North Port Police Department) were informed last night of Brian’s parents’ intentions and they met Chris and Roberta there this morning.

“After a brief search off a trail that Brian frequented some articles belonging to Brian were found. As of now law enforcement is conducting a more thorough search of that area,” Bertolino added.

the Medical Examiner’s Office has been summoned to the site.

The find was made after the heavily wooded reserve — which had been closed to the public late last month for the FBI-led search — reopened, the city announced on Twitte.

The neighboring 25,000-acre Carlton Reserve, where authorities have also been searching for the fugitive, was listed by Sarasota County as also being open.

Before Gabby Petito disappeared while on a cross-country van trip with her fiancé, her conversations with her mother appeared to reveal Petito had “more and more tension” with her travel partner, a police affidavit for a search warrant indicates.

The affidavit, filed by Florida police last week, offers new insight into what investigators have gleaned as they try to determine not only what happened to Petito but also the current whereabouts of the fiancé who returned to Florida this month without her.

Brian Laundrie, Gabby Petito’s fiancé, has been missing for a week. Here’s why it’s been so hard to find him

Human remains that officials said are consistent with Petito’s description were found Sunday in an undeveloped camping area in Wyoming’s Bridger-Teton National Forest on the eastern edge of Grand Teton National Park.
An autopsy was underway Tuesday morning, and the FBI is expected to release the results later in the day, Teton County Coroner Dr. Brent Blue said

And a police search for the fiancé, Brian Laundrie, resumed Tuesday at a Florida nature reserve where his parents reportedly said he indicated he was going last week.
Petito, 22, and Laundrie, 23, had been road-tripping in a white van from New York through the US West over the summer, regularly posting photos and stories to their social media pages with the hashtag #vanlife.

Those posts abruptly stopped in late August, and Laundrie returned to his North Port, Florida, home on September 1 in their van without Petito, whose family reported her missing September 11. Authorities are looking for Laundrie, whose parents told investigators he left home with a backpack September 14, and have searched his home, including.

The case has become an obsession for many, spurring digital detectives to comb through the couple’s online trail. The story has also further highlighted the tens of thousands of unsolved missing persons stories.
Before she vanished, Petito sent multiple text messages and had many talks with her mother via cell phone during her trip, Florida police wrote in an application filed last week for a search warrant for an external hard drive found in the couple’s van.

In those conversations, there “appeared to be more and more tension between her and Laundrie,” the affidavit reads. On August 27, Petito’s mother received one last communication from her daughter, which she called an “odd text,” the affidavit says.

The message read: “Can you help Stan, I just keep getting his voicemails and missed calls.” Because the text message referred to Petito’s grandfather as Stan, her mother was concerned that something was wrong, the warrant states.
Following that text message, Petito’s phone was no longer operational and she stopped posting anything on social media about their trip, the warrant says.

“We drove by and the gentleman was slapping the girl,” the caller says. “Then we stopped. They ran up and down the sidewalk. He proceeded to hit her, hopped in the car, and they drove off.”
Police later stopped the couple, and previously released police documents and body-camera video reveal what followed that day.
Although the Petito and Laundrie are described in a police report as getting into a physical fight following an argument, “both the male and female reported they are in love and engaged to be married and desperately didn’t wish to see anyone charged with a crime,” Officer Eric Pratt wrote in the report.

At the suggestion by police, the couple separated for the night, the report said, which described Petito as “confused and emotional.”
A National Park Service ranger who also responded to the call interacted with Petito for about 90 minutes, and warned her that her relationship with Laundrie had markings of a “toxic” one, the ranger told the Deseret News of Utah.
“I was imploring with her to reevaluate the relationship, asking her if she was happy in the relationship with him, and basically saying this was an opportunity for her to find another path, to make a change in her life,” ranger Melissa Hulls said